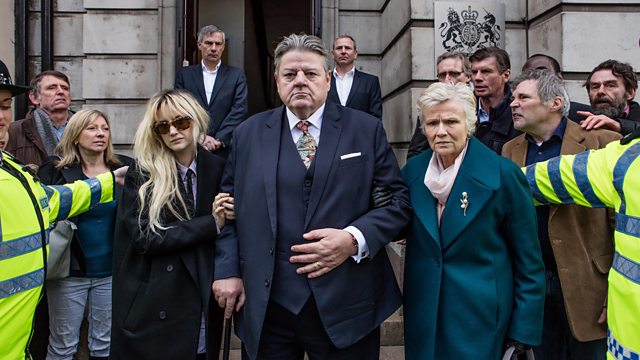 Julie Walters and Jack Thorne join John Wilson to discuss their new TV drama, plus Nicole Farhi on sculpting hands, Gillian Slovo on imprisonment, and Adrian Wootton on The Clan.

New TV drama National Treasure examines the impact, both public and private, of accusations of historic sexual offences against a fictional much-loved public figure played by Robbie Coltrane. John Wilson talks to screenwriter Jack Thorne, who recently co-wrote Harry Potter and the Cursed Child and Julie Walters who plays the long-suffering wife of the National Treasure. The first episode of National Treasure will be broadcast on Channel 4 on 20th September.

Best known for her fashion label, Nicole Farhi is now making her name as a sculptor. The two disciplines are very different she says; "as a designer, I used my head, but as an artist, I use my guts". As her second solo show opens she explains why she's been drawn to sculpt human hands. The Human Hand, at London's Bowman Sculpture starts tomorrow and runs until the end of the month.

Argentinian crime saga The Clan is based on the true story of the Puccios, a middle class family who ran a secret business of kidnapping and murder from their home in Buenos Aires in the 1980s. The film took best director at Venice Film Festival last year and broke box office records in its native Argentina. Adrian Wootton reviews.
The Clan is released this Friday, certificate 15.

Gillian Slovo talks about her involvement with Letter from Inside, a series of radio letters airing this week by leading writers and artists on the theme of imprisonment, including Jeanette Winterson and Ai Wei Wei. Three Letters from Inside is broadcast at 1945 tonight, tomorrow and Wednesday. Inside: Artists and Writers is at Reading prison until 30th October.

Image: Nicole Farhi works on one of her sculptures

Artangel's Inside: Artists and Writers is at Reading prison until 30 October 2016.

Image: A Puccio family gathering in The Clan