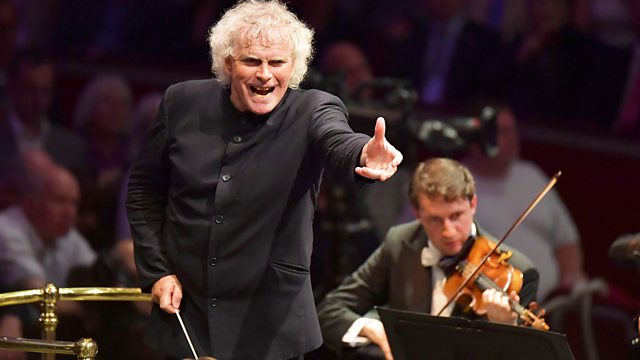 Closely associated with both live performances and recordings of the Mahler symphonies throughout his career, Rattle steers the world-leading orchestra through the intense drama of this huge and complex but emotionally powerful orchestral work, marshalling unconventional instruments including cowbells, mandolin and guitar.

The Mahler is preceded by a short work by iconoclastic French composer Pierre Boulez, who died in January 2016 aged 90. Written to mark his 40th birthday in 1965, Eclat is a study of resonance written for 15 instruments. The title means 'burst' but also 'fragment, explosion, reflections of light', and it references Boulez's own dual roles as conductor and composer by giving the conductor control over when and how to cue elements of the ten-minute piece.

Rattle has been the Berlin Philharmonic's chief conductor and artistic director since 2002 and in autumn 2017 he returns to Britain to become music director of the London Symphony Orchestra.