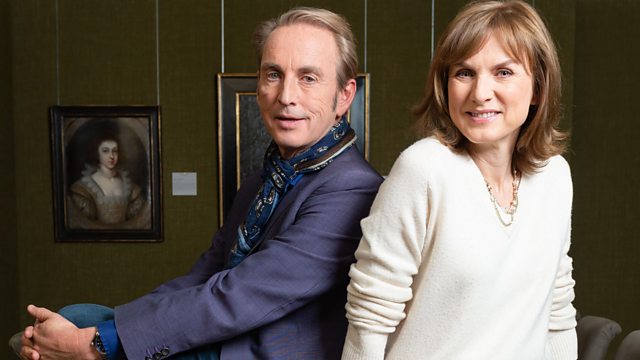 Fake or Fortune? Series 5
Episode 4 of 4

Every year, the Fake or Fortune team receive hundreds of requests for help from the owners of mysterious portraits. Everyone wants to know two things - who is it, and who painted it?

The team choose three of the most promising portraits to investigate further - a child, believed to be by prized modern artist Willem de Kooning, a young lady, attributed to 18th-century society painter Philip Mercier, and a formidable-looking man, said to be by 19th-century German master Adolph von Menzel.

Philip Mould takes on the de Kooning case, meeting Belgian owners Jan and Chris Starckx. Could a speculative online purchase for 450 euros be a lost work painted by de Kooning in Brussels at the very start of his career? The quest to prove it leads to Miami, Florida, where scientific analysis of a similar work has the potential to yield vital evidence.

Fiona Bruce wants to know how an 18th-century portrait of a lady ended up in the flat of Richard and Jenny Williams, a retired couple in Eastbourne. Conservation work might help reveal some secrets while research into the life of the artist provides some clues about the identity of the mystery lady.

The investigation into the portrait of The Old Gentleman takes an unexpected turn when the team delve into the story of owner Lance Miller's grandfather, a German industrialist who bought the painting in 1947. With Menzel's work frequently targeted by forgers, has Lance inherited a rare treasure - or something more sinister?

Three pictures, three important artists - but as scientific testing and investigative research unlock long-held secrets, will every story have a happy ending?

See all clips from Portraits (2)