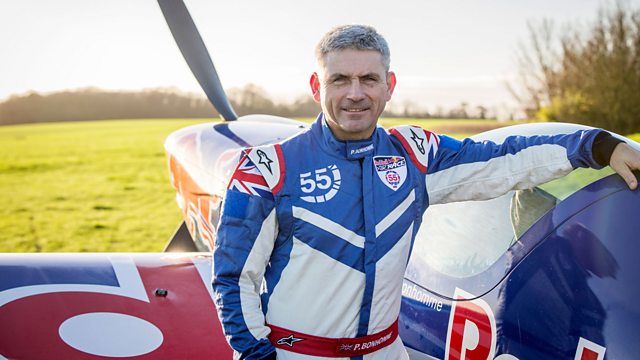 Skies Above Britain
Episode 2 of 5

A look at the hidden world of the skies above us. Air traffic controllers guide a passenger jet with a major technical fault safely back to the ground.

Skies Above Britain continues with stories of the extraordinary challenges of the skies, both at NATS - the UK's air traffic nerve centre -and up in the air. At NATS, air traffic controllers guide a passenger jet with a major technical fault safely back to the ground and respond to an unidentified flying object detected on the radar screens.

The biggest air race in the world is taking place at Ascot and British Airways captain Paul Bonhomme, who is also one of Britain's fastest race pilots, is out to win the title for a second time before retiring. The aerial slalom course is high risk, with pilots flying at speeds of up to 230mph, metres above the ground.

Stefan is a YouTube video blogger with a new camera-drone, which he has bought to make his videos stand out. After an ill-advised flight in central London, he discovers to avoid arrest he must undertake special training.

Lynne is terrified of flying and hasn't boarded a plane in 17 years. Now she must overcome her fear and brave a flight to Australia to honour her late mother's wishes to have her ashes scattered there.

Ross was told he could never become a pilot because he has restricted growth but now, at 31, he is setting out to prove the doubters wrong by learning to fly.