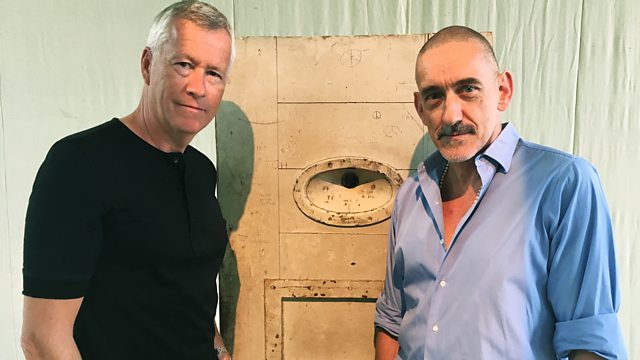 As it opens to the public for the first time, John Wilson visits Reading Prison, the location of a new project which sees artists respond to the work of the jail's most famous inmate, Oscar Wilde.

Björk, famed for her experimental style, now opens a new exhibition of immersive virtual reality experiences set to her last album Vilnicura. It includes one film shot from inside the singer's mouth. We review with Kate Mossman.

With the Venice Film Festival in full swing across the continent Jason Solomons reports back on the films causing a stir.

The trial of Helen Titchner for attempted murder begins on Sunday's edition of The Archers. Over a week, the ins and outs of her relationship with abusive husband Rob will be played out in court. Will there be shock confessions, surprise witnesses, and legal spats? Crime writer and playwright, Denise Mina, describes the dilemmas of writing a court scene.

Terence Conran, The Veronica Scanner, The Cheviot, The Stag and the Black, Black Oil

Inside: Artists and Writers in Reading Prison

Original door to Oscar Wilde’s cell.  Inside: Artists and Writers in Reading Prison is presented by Artangel.

The Collection is available on Amazon Prime on Friday 2 September.