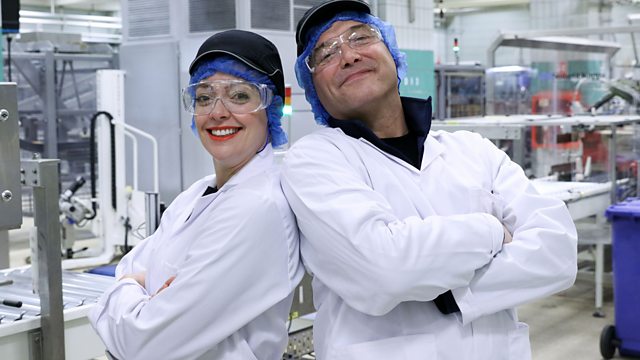 Inside the Factory Series 2
Episode 4 of 6

Gregg Wallace explores the largest bicycle factory in Britain, which produces 150 folding bicycles every 24 hours, and joins a multi-stage manual production line to make his very own bike. He learns how to put together 1,200 individual parts and attempt to braze a bike frame together using extreme heat of 1,000 degrees, a skill that takes years to master. He also visits a leather saddlemaker in Birmingham that has been making saddles for 150 years and discovers how they use cowhide from UK and Ireland cows because the cold weather means they have thicker skins.

Meanwhile, Cherry Healey gets some tips from Cycling Team GB to help us all improve our pedal power, including how lowering your body position can make a 10 per cent improvement to speed and efficiency. She also learns how to paint a bike frame fit for the British weather using an electrostatic charge and a 180 degree hot oven, and investigates why cyclists and trucks are such a deadly combination - in London alone there have been 66 fatalities since 2011 and half of them were collisions with a truck.

Historian Ruth Goodman reveals that folding bikes date back to the 1870s and discovers how 70,000 folding 'parabikes' were manufactured during World War II, some of which played a role in the D-Day landings. She also finds out how the invention of the safety bicycle in the late 1880s was used by suffragettes to ride to rallies and spread the word in their fight for equality.