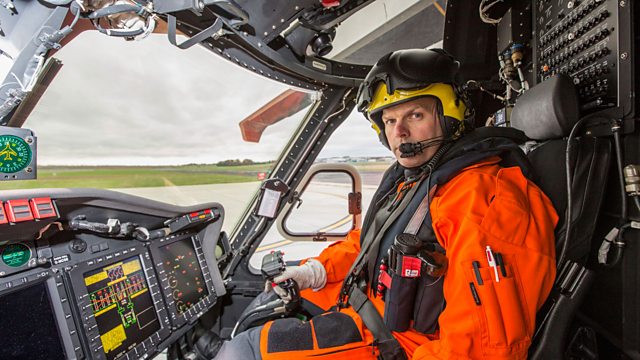 Skies Above Britain
Episode 1 of 5

A look at the hidden world of the skies above us and the stories of people who spend their life in flight. This episode explores how our skies are safeguarded.

In the first episode, Skies Above Britain explores how our skies are safeguarded - air traffic controllers deal with an unidentified aircraft flying across Gatwick's flight path, and the RAF scramble a typhoon jet to intercept an unresponsive plane.

We follow the RAF pilots training to fly Britain's front-line combat aircraft - the Typhoon. The supersonic jet flies at twice the speed of sound and becoming a Typhoon pilot is the pinnacle of the RAF. Trainees face a gruelling series of mental and physical tests, including being subject to high gravitational forces in a centrifuge and experiencing rapid air decompression and training for emergency scenarios, like ejecting over water.

In Humberside, the helicopter crews of HM Search and Rescue are often the only aircraft that fly when the skies are treacherous. We follow the crew on a dangerous mountain rescue, flying through thick fog, just feet away from a mountain's rock face to reach an injured hiker. When fog descends over London's airports, NATS must rapidly cut the number of planes allowed to enter British airspace.