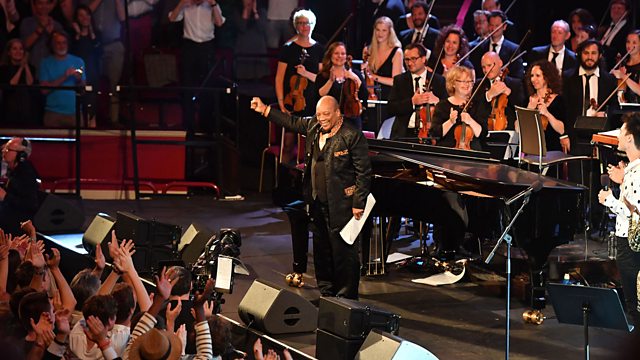 Live at the BBC Proms: Quincy Jones with the Metropole Orkest.

Live from the Royal Albert Hall
Presented by Sara Mohr-Pietsch

Jules Buckley and his Metropole Orkest return to the Proms to celebrate the career of composer, arranger, conductor, producer and all-round musical giant Quincy Jones. Recent musical partners of Quincy's join the longest-established jazz orchestra in existence as special guests to collaborate on new arrangements of hits both old and new - and the great man himself makes an appearance.

Including at 8.20 pm during the interval: PROMS EXTRA
Clemency Burton-Hill discusses the Quincy Jones music featured tonight, as well as his remarkable career as composer, arranger and producer, with conductor Jules Buckley and journalist Angus Batey. Recorded earlier in the Concert Hall of Imperial College Students' Union.

The annual BBC Proms Inspire Young Composers' Competition for 12-18 year olds provides what most composers only dream of: the chance to have their music performed by professional musicians at the BBC Proms and broadcast on BBC Radio 3. Not only this - winners also receive a BBC commission for a high-profile performance and are mentored throughout the process by a professional composer

On Monday 15th August 2016 the Aurora Orchestra gave a concert in the Radio Theatre at Broadcasting House in London featuring the six winning pieces from this year's competition. Over the past week we've been broadcasting these performances and tonight it's the turn of 16 year old Morgan Overton and his piece entitled Two Boys.