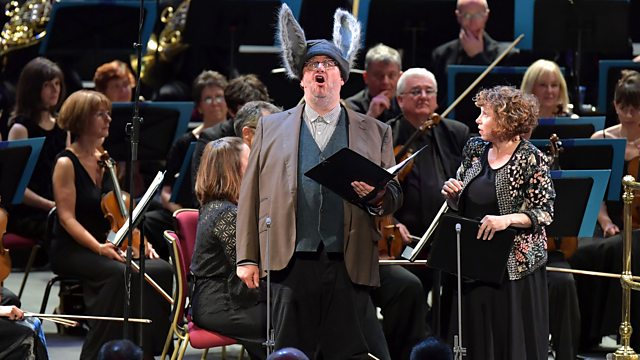 Narcissus, the Thespian hunter who fell in love with his own image, inspired Matthias Pintscher to compose his own reflection on 'the interaction of different groups and their mirror images', a work for cello and orchestra. Pintscher conducts Reflections on Narcissus here before a semi-staged performance of Mendelssohn's incidental music to A Midsummer Night's Dream.
Mendelssohn's delicate, mercurial and strident music is interspersed with excerpts from Shakespeare's text to form a centrepiece of this season's celebrations of Shakespeare's 400th anniversary.

PROMS EXTRA: Shakespeare - Sheep and Shepherds
References to sheep, lambs, fleeces, wool and shepherds are to be found in many of Shakespeare's plays. From Corin in 'As You Like It' who describes himself as a 'natural philosopher' to Perdita's saviour in 'The Winter's Tale', they are key characters in the plots and reflect the importance of the wool trade in Elizabethan England. James Rebanks, the Herdwick Shepherd, talks about his life as a shepherd in Cumbria and how much - if at all - the shepherd's life has changed over the past 400 years. He will be joined on stage by Shakespeare expert Dr Emma Smith from the University of Oxford who presented Radio 3's Sunday documentary looking at the buyers of Shakespeare's First Folio. The discussion is hosted by Eleanor Rosamund Barraclough from Durham University who was selected as a New Generation Thinker in 2013 in the scheme run by the BBC and the Arts and Humanities Research Council to find academic broadcasters of the future.
Producer: Zahid Warley.

The annual BBC Proms Inspire Young Composers' Competition for 12-18 year olds provides what most composers only dream of: the chance to have their music performed by professional musicians at the BBC Proms and broadcast on BBC Radio 3. Not only this - winners also receive a BBC commission for a high-profile performance and are mentored throughout the process by a professional composer.

On Monday 15th August 2016 the Aurora Orchestra gave a concert in the Radio Theatre at Broadcasting House in London featuring the six winning pieces from this year's competition.  Between now and Monday 22nd August there's a chance to hear these winning pieces and tonight it's the turn of James Chan and his piece entitled Litany.