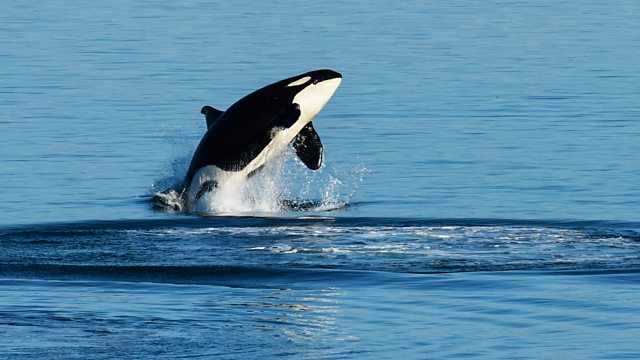 The killer whale is the only other animal species that goes through the menopause. Victoria Gill joins scientists in search of matriarch whales and their wisdom to find why.

Killer whales and humans are almost unique in the animal kingdom. The females of both species go through the menopause in their 40s or 50s, and then live for decades without producing any more offspring themselves. It's an extremely rare phenomenon. No other mammal does this, including other apes, monkeys and elephants, with the exception of another species of toothed whale. There are good grounds for thinking the menopause evolved for a reason, but why?

Last summer BBC science reporter Victoria Gill took to the sea off the northwest coast of the USA with scientists who believe the killer whales in this part of the world can explain why the menopause evolved in both orca and our own species.

Victoria encounters 'Granny' who was then the world's oldest known orca - a matriarch killer whale, estimated to have been 80 to 105 years old. Since the first broadcast of this programme, Granny (more properly known as J2) is believed to have died.

J2 was one of a particular clan of killer whales known as the Southern Residents. This group has been at the centre of the longest running and most detailed study of a population of whales in the world. In 1976, the Center for Whale Research took up the task of identifying and counting every member of the Southern Residents, who inhabit the Salish Sea region between the USA and Canada. The project arose from fears that too many of members of the clan were being captured for the entertainment industry and taken to zoos and commercial 'dolphinariums'.

The survey's findings led to a ban on the removal and rendition of orca from the Salish but the Center's work has continued. There is now forty years of data on births, deaths, family ties and health status of all the individual whales among the Southern Residents,.

The data has become of huge interest to evolutionary biologists Darren Croft of the University of Exeter and Daniel Franks of the University of York who are analysing it to explore why killer whale females live for decades after they've stopped reproducing themselves. They've discovered that these older females are critical to the survival of other members of their families - particularly their adult sons.

A female killer whale's offspring of both sexes stay with her for her lifetimes. If a matriarch dies, her fully grown sons are eight times more likely to die in the following year. Her adult daughters are also at risk. Further study of the Center's data suggests that the whale matriarchs possess decades of knowledge and wisdom about their world on which her offspring and grand-offspring depend. This may well go part of the way in explaining why old females have evolved to stop reproducing themselves and focus on promoting their genetic legacy through her children's and grandchildren's success.

One of the potential evolutionary explanations for the menopause in our own species is the 'Grandmother hypothesis'. In the killer whales, you might say it's a combination of the Grandmother and Italian Mother hypothesis. But according to Croft and Franks, even that doesn't completely solve the mystery of the menopause. So what might?

See all clips from The Whale Menopause (4)