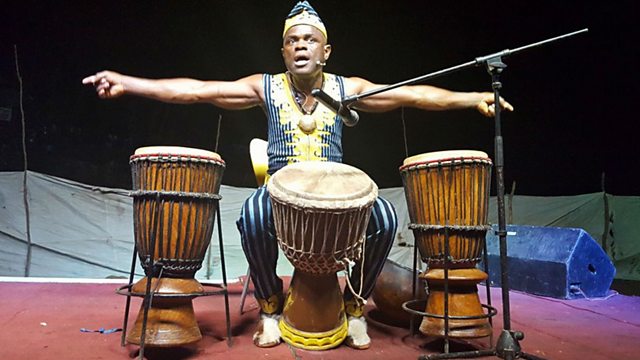 The Story of the Monkeys and the Fishes

Sierra Leonean storyteller Usifu Jalloh is inspired by the people of Sierra Leone, rebuilding their communities after Ebola.

A series in which poets and storytellers respond to stories underneath the world news headlines.

In part 2 of The Headline Ballads the Sierra Leonean storyteller, Usifu Jalloh, is inspired by the people rebuilding their communities after Ebola. His Headline Ballad - The Story of the Monkeys and the Fishes - is told with his drum and a traditional thumb piano. It runs through the programme and is interwoven with personal testimonies from those who experienced the crisis in Sierra Leone at first hand. We hear from Ebola survivors, from the leader of a burial team, from a nurse who kept a hospital running virtually single handedly, from a man who ran the government's emergency Ebola response room, and also from the children caught up in the crisis and now coping with its aftermath.

The Island, the Sea, the Volunteer and the Refugee

Whilst the Water Weeps Next to the Water

See all episodes from The Headline Ballads