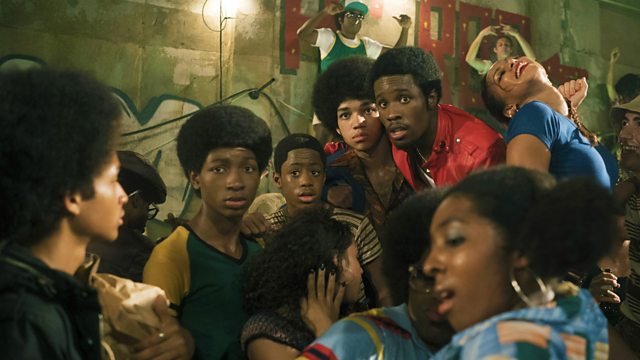 Baz Luhrmann's The Get Down, Krys Lee, Allegro at 70, Windsor racecourse's resident artist

Baz Luhrmann's The Get Down, Krys Lee's novel How I Became A North Korean, Rodgers and Hammerstein's Allegro 70 years on, and the artist in residence at Royal Windsor racecourse.

Kevin Legendre reviews Baz Luhrmann's first TV project, The Get Down, a high-octane slice of life chronicling the birth of hip hop in 1970's New York.

Kirsty speaks to writer Krys Lee whose debut novel, How I Became A North Korean, is set in one of the most complex and threatening environments in the world - the border between China and the 'hermit nation'.

Rodgers and Hammerstein's musical Allegro was their third collaboration for the stage following Oklahoma! and Carousel. It opened on Broadway in 1947. With a new production in London, director Thom Southerland and critic Matt Wolf discuss its revival 70 years on.

Baz Luhrmann's The Get Down

Images:  Main image above, and image to the left - Some of The Get Down cast, including Jaden Smith, Skylan Brooks, Tremaine Brown Jr, Justice Smith and Shameik Moore.

Krys Lee's book, How I became a North Korean is out now.

Rodgers and Hammerstein's musical Allegro is at the Southwark Playhouse, London until 10 September 2016.

Image: Elizabeth Armstrong in front of some of her work