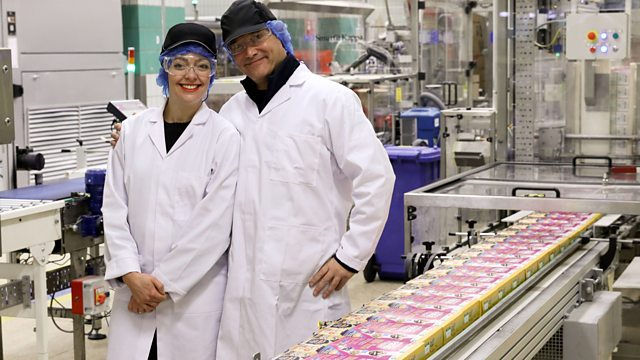 Inside the Factory Series 2
Episode 1 of 6

Documentary series. Gregg Wallace receives a load of corn fresh off the boat from Argentina and follows its journey through the largest breakfast cereal factory in Europe.

Gregg Wallace receives a load of corn fresh off the boat from Argentina and follows its journey through the largest breakfast cereal factory in Europe as it is cooked, milled and flavoured to become Crunchy Nut Cornflakes. He discovers how they can produce more than a million boxes of cereal every 24 hours and distribute them all over the UK, Europe and across the globe, as far away as Malaysia.

Meanwhile, Cherry Healey finds out about the immunity-boosting powers of vitamin D, which is added to many of our breakfast cereals. One in five of us is deficient in the sunshine vitamin and yet the latest research shows that having optimum levels can potentially prevent you from getting the common cold by up to 50 per cent. Cherry also discovers the effect that skipping breakfast has on our cognitive function - studies show that breakfast skippers perform seven per cent worse in attention tests - and she also follows the production of the nation's best-selling cereal, Weetabix, and learns how every single grain of wheat that is milled for these wheat biscuits is grown within a 50-mile radius of the factory.

Historian Ruth Goodman sits down to a Victorian breakfast of lobster and pig's head to reveal how the average Victorian was gorging down a mind-boggling 4,500 calories a day and that breakfast cereal was invented as a healthy alternative. She also discovers that when it comes to advertising cereal, nostalgia certainly seems to pay - the six top sellers in the UK today were all invented more than 30 years ago and the cereal industry is now worth over one and a half billion pounds.