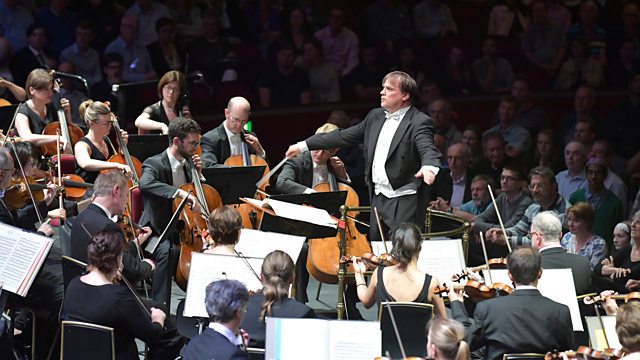 Live at BBC Proms: The BBC Philharmonic and John Storgards in the UK premiere of Jörg Widmann's Armonia and Nielsen's Symphony No.5. They are joined by Thomas Zehetmair for Schumann's Violin Concerto.

PROMS EXTRA: Shakespeare - Shipwrecks and Sea Captains
In the third discussion about the way Shakespeare depicted different professions in his plays, veteran sailor Sir Robin Knox-Johnston, the first man to circumnavigate the world single-handed, looks at playwright's view of the sea, shipwrecks and sea captains. He's joined on stage at Imperial College Union by New Generation Thinkers Dr John Gallagher from the University of Cambridge, and Nandini Das from the University of Liverpool, who chairs the discussions.

New Generation Thinkers is a scheme run by BBC Radio 3 and the Arts and Humanities Research Council to find academics who can turn their research into radio.