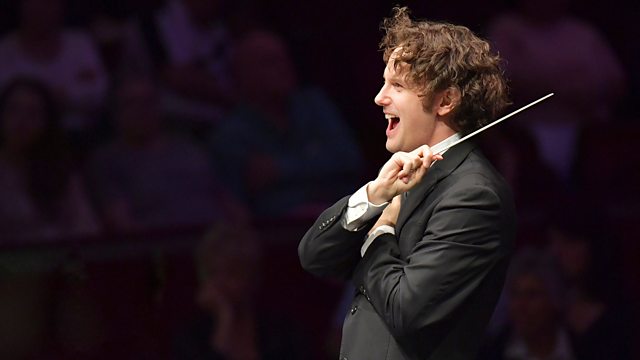 4.25 INTERVAL: Sheet Music
A closer look at the journey the music takes from the composer's pen to the orchestral players' music stands. With contributions from conductor Nicholas Collon and Mozart expert Cliff Eisen.

It's difficult to imagine how Mozart could have followed his final symphony, the 'Jupiter' - a work of such scale, majesty and intensity. Tom Service and Nicholas Collon unpick Mozart's continuous stream of joy and invention, allowing us to get under the skin of this great work, which the Aurora Orchestra plays from memory.
Before it, one of the world's leading oboists, François Leleux, plays Strauss's twisting, singing Oboe Concerto - itself preceded by Wolfgang Rihm's Hunted Form, whose animal energy suggests a pursuit more physical than a search merely for musical structure.

PROMS INTERVAL: Sheet Music
As the Aurora Orchestra prepare to play Mozart's Jupiter Symphony from memory, this afternoon's interval traces the journey of music from the composer's pen to the players' and conductor's stands, and celebrates the often overlooked and underestimated role of the music librarian. With contributions from conductor Nicholas Collon and Mozart expert Cliff Eisen.