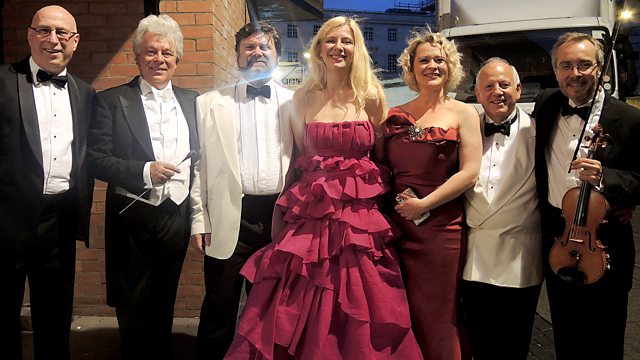 Classics at the Movies

Ken Bruce presents a selection of classical music used in films with the BBC Concert Orchestra under Christopher Warren-Green.

Friday Night is Music Night - From Apocalypse Now to Toy Story Hollywood has regularly raided the works of the great composers for their blockbuster movie soundtracks.

Of all the great classical composers few lived to see their music used in the cinema. Sir William Walton wrote for the First of the Few, the Battle of Britain and for Olivier's great Shakespearean films. Sir Malcolm Arnold wrote extensively for the screen including Bridge Over the River Kwai, and the Belles of St Trinians. And in Russia Dmitri Shostakovitch broke the mould and wrote symphonies, concertos and scored for 34 films including The Gadfly.

In this Friday Night is Music Night concert Ken Bruce presents a selection of classics that have been used in films.

Just imagine the tally of Oscars Mozart might have won had he been around in the cinema age. To date his works have been used in the likes of Ace Ventura Pet Detective, Charlie's Angels, Star Trek, X Men, Fame, Out of Africa , When Harry Met Sally...and of course, his own 8 Academy Award winning biopic Amadeus.

Brief Encounter was released in 1945. A screenplay by Noel Coward directed by David Lean. Two star-crossed lovers played by Trevor Howard and Celia Johnson filmed mostly on Carnforth Railway Station in Lancashire. It is said that Coward himself suggested Rachmaninov's 2nd Piano concerto to set the romantic mood. Rachmaninov sadly didn't live to see his great work used to great effect on the silver screen - he had died 2 years earlier.

Tonight's singing guests include Ilona Domnich(soprano); Bonaventura Bottone(tenor); Simon Thorpe(baritone) and the pianist for the Rachmaninov is Valentina Lisitsa.

Popcorn is not included....

During the interval we visit the Imperial War Museum's Real to Reel exhibition to explore 100 years of war films. This year marks the centenary of the Battle of the Somme and the release of a film shot by cinematographers, Geoffrey Malins and John McDowell on the Western Front. Following it's premiere in London on 10 August 1916 an estimated 20 million people attended their local cinemas to see the film - that was more than half the UK population at the time. Each screening was preceded by the reading of a letter from Lloyd George, exhorting the audience to "see that this picture, which is in itself an epic of self-sacrifice and gallantry, reaches everyone. Herald the deeds of our brave men to the ends of the earth. This is your duty."

Curator Laura Clouting explains how war stories of love and loss, fear and courage, triumph and tragedy are transformed into movies for the big screen with illustrations from The Dam Busters, Where Eagles Dare, Saving Private Ryan and War Horse. We'll also hear how the silent film - The Battle of the Somme - has been transformed - 100 years on - by a brand new orchestral score by Laura Rossi.