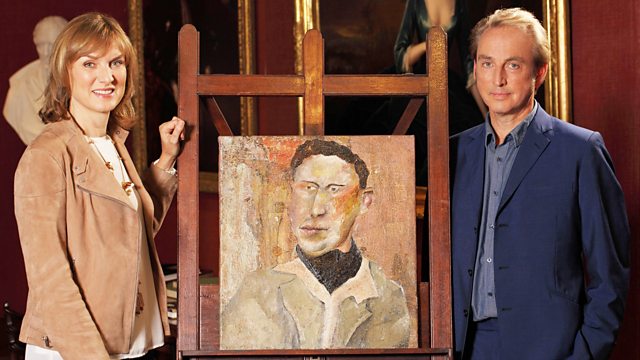 Fake or Fortune? Series 5
Episode 1 of 4

Art series with Fiona Bruce and Philip Mould. Can the team prove that a portrait is one of Lucian Freud's earliest works, even though Freud himself denied painting it?

Fake or Fortune returns for a fifth series, beginning with one of the most challenging cases the team has ever encountered. Can art detectives Philip Mould and Fiona Bruce prove that a painting of a man in a black cravat is one of the first pictures ever painted by celebrated and controversial British artist Lucian Freud, even though Freud himself denied painting it?

London-based designer Jon Turner is eager to prove that a painting he inherited from two friends is in fact an early portrait painted by Freud whilst at art school in 1939. If it's genuine, it could be worth around half a million pounds. But who is the mysterious man in the portrait - and why did Freud deny it was his work?

As the team hunt for clues, they are drawn into a world of feuds, rivalries and intrigue. Can those who knew Freud best help unlock the painting's secrets?

See all clips from Freud (2)