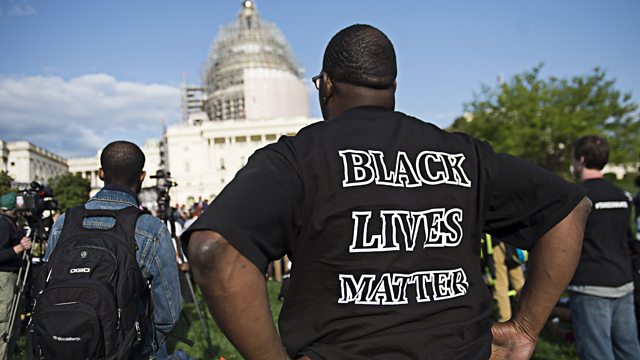 Six young black male playwrights give personal responses to policing and profiling in the US and the legacy of the fatal shooting of 18-year-old Michael Brown in Ferguson, Missouri

When a white police officer shot and killed 18-year-old Michael Brown in Ferguson, Missouri on August 9th 2014, it sparked a wave of protest across America and became emblematic in the Black Lives Matter movement.

Now, six black American playwrights aged between 30 and 40 years old, dig deep into what it’s like being young, black and male today in an America of institutionalised profiling.

Hands Up’began as part of a theatre festival, The New Black Fest, based in New York. Keith Josef Adkins who runs the festival wanted these playwrights to think hard about their personal politics and to respond to what happened in Ferguson. They looked at the immediate aftermath of the tragic event, the protests and the wider implications.

Their testaments are extremely varied. For some, what happened to Michael Brown could happen to them anytime, any day, and they live in constant fear of witnessing or experiencing profiling, harassment, arrest and even a fatal shooting. Others feel guilty about not being able to relate to the racism Michael Brown faced because they come from a wealthier background, or because they come from the metropolis, or are lighter skinned. For one writer it’s a sense of ambivalence because he was adopted by white parents. They all attempt to understand Brown’s experience, to figure out what he could have done differently, if anything. They share their fears and feelings through real and imagined scenarios, and they offer their ideas and dreams about how to fight racism and change society.

The plays are linked by comments from young black men interviewed on the streets of New York and documentary news material from St Louis Public Radio and WBEZ Chicago.

The plays and playwrights:
How I Feel by Dennis A. Allen II

Walking Next to Michael Brown by Eric Holmes

Holes in my Identity by Nathan Yungerberg

They Shootin! by Idris Goodwin

This is the first in a two part series, Black and Blue, about black men and the police in America, broadcast on consecutive days . Judith Kampfner adapted Hands Up from the stage and the second play, String Music, from a George Pelecanos short story. Both were recorded and produced in America.

A Corporation for Independent Media production for BBC Radio 4