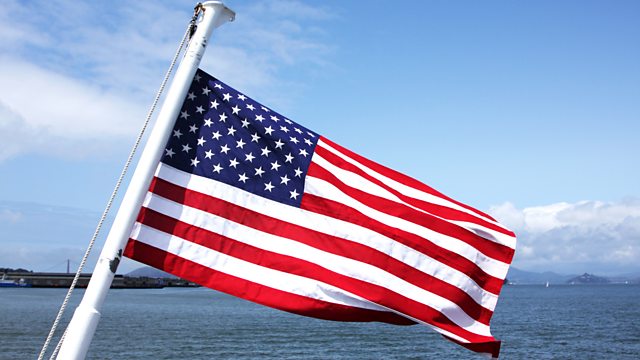 The Battle for the US Constitution

Adam Smith on how a constitutional amendment passed 150 years ago has become the battleground for America's hottest issues, from immigration to trans rights to corporate rights.

How has an Amendment passed just after the US Civil War become the battleground on which modern America's most ferocious issues are fought out? Historian of 19th century America Adam Smith travels to Washington DC and North Carolina to find out.
The Fourteenth Amendment to the US Constitution declares that anyone born on US soil "and subject to the jurisdiction thereof" is an American citizen.
It was intended to give freed slaves guaranteed citizenship in the wake of the 1861-65 Civil War.
But today, it also means the children of illegal immigrants to the US automatically become American citizens. Which places it right at the heart of the huge controversy over immigration that has raged through the Presidential election.
That's why Donald Trump wants to abolish the Amendment altogether. Ted Cruz and other leading Republicans have expressed similar views. Adam talks to a senior Republican Congressman, Steve King, who wants instead to radically reform the interpretation of the Amendment - so that it no longer gives the children of undocumented migrants the right to a US passport.
And Adam talks to a Tito, 19 and born in Mexico, and Georgina, 14 and born in America. Their parents are undocumented Mexican migrants - but while Georgina is a citizen, Tito is not, despite living in America since he was six.
Meanwhile, the Fourteenth Amendment also guarantees the "equal protection of the laws." So the arguments over everything from voting rights to transsexual people's choice of public bathroom come back to this revolutionary change to American law.
Outside the North Carolina Legislative Building, Adam watches a protest vigil for the Orlando massacre, full of speeches and songs. There he talks to its charismatic leader, Rev. William Barber, about the crucial role of the Fourteenth Amendment in underpinning his struggle for both gay and trans rights - and voters' rights.
He goes inside the Legislative Building to meet David Lewis, who defends the redrawing of electoral boundaries in North Carolina against accusations of racist gerrymandering - and defends North Carolina Republicans' new law forbidding transsexuals to enter the bathroom of the gender with which they identify.
And Adam talks to Payton McGarry, a trans man who is one of those suing the state of North Carolina for banning him from entering the male bathroom in any public building.
Usually, conservatives insist on a strict interpretation which says the Amendment's authors were not intending to legalise gay marriage, for example - another instance of an extension of rights made possible by the Amendment.
But strikingly, the meaning of the Fourteenth Amendment is also fought over in a very different way. This is the idea, bolstered by the Amendment, that, as Mitt Romney said "corporations are people too".
Adam talks to a former lawyer from the conservative campaign group Citizens United, who succeeded in having limits on election spending by corporations struck down. And he visits the offices of the liberal Stamp Stampede, which is campaigning for a new Amendment to outlaw the idea that corporations are people, in order to force 'big money' out of politics.
As America approaches a seismic Presidential vote in November, the fate of the Fourteenth Amendment hangs in the balance. Whoever wins will very likely get to appoint enough new Supreme Court justices to give the court a decisive majority - either conservative or liberal. And even if the Fourteenth Amendment survives, its meaning may be so radically reinterpreted that the current state of play on all these issues is upended for years.
Producer: Phil Tinline.