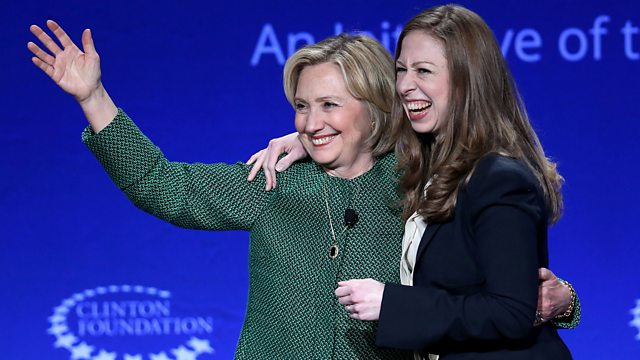 Hillary Clinton will address delegates tonight at the Democratic Convention in Philadelphia for the first time since being officially nominated as their nominee for President of the United States. Sharon Manitta from Democrats Abroad and Felicity Spector, Deputy Programme Editor of Channel 4 news look ahead to the speech and what lies ahead for Hillary in the presidential campaign.

Woman on woman sexual assault is not common and remains rarely discussed. Does the reluctance to acknowledge its existence make women less willing to come forward to report it? Lecturer, Rebecca Twinley discusses her new research with Yvonne Traynor, Chief Executive Officer at Rape Crisis

Honor Frost was a pioneer of maritime archaeology and revolutionised the way underwater excavations were carried out. Jenni speak to Dr Alexandra Sofroniew Curator of an exhibition of her work at the Ashmolean Museum, Oxford.

Woman's Hour takes another glimpse inside Her Majesty the Queen's royal wardrobe in the exhibition Fashioning a Reign to mark her 90th Birthday. Today Emma Barnett explores dressing for a state occasion with the critic Shahidha Bari and Senior Curator at the Royal Collection, Caroline de Guitaut.

Mirela Sula is the Founder and Editor-in-Chief of Global Woman Magazine and Founder of the Global Woman Summit which takes place this weekend in London. She grew up in in a remote village in Albania under the communist regime and has since moved to London where she dedicates her life to helping other migrant women achieve success.

The three Fashioning a Reign exhibitions continue at:

The Summer Opening of the State Rooms, Buckingham Palace: 23 July - 2 October 2016, the largest of the exhibitions.