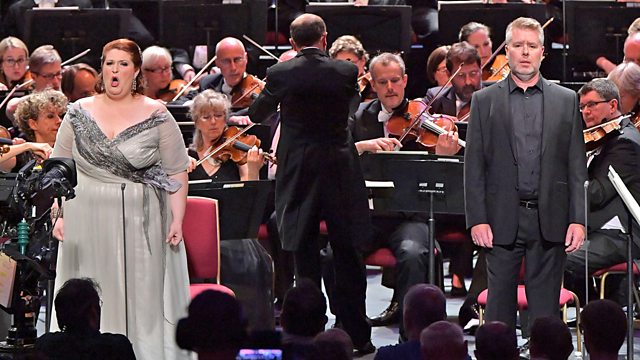 Live at BBC Proms: BBC National Orchestra and Chorus of Wales, Mark Wigglesworth perform the final scene of Wagner's opera Die Walküre and Tippett's A Child of Our Time.

8.10 INTERVAL: Proms Extra
Martin Handley is joined by Oliver Soden and Jessica Williams to introduce Michael Tippett's oratorio A Child of Our Time and discuss the life and work of the composer. A Proms Extra event recorded at the Imperial College Union in London.

As Europe slipped towards Fascism, Michael Tippett felt solidarity with the downtrodden. Then, in 1938,a young Polish Jew, whose parents had been deported by the Nazis, shot a German diplomat in Paris. Tippett had the central figure for his 'oratorio of contemplation', A Child of Our Time - inspired by Bach's Passions, Handel's Messiah and American spirituals.
Mark Wigglesworth also explores the theme of parent-child relationships in the final scene of Wagner's opera Die Walküre, culminating in Wotan's poignant farewell to his daughter.