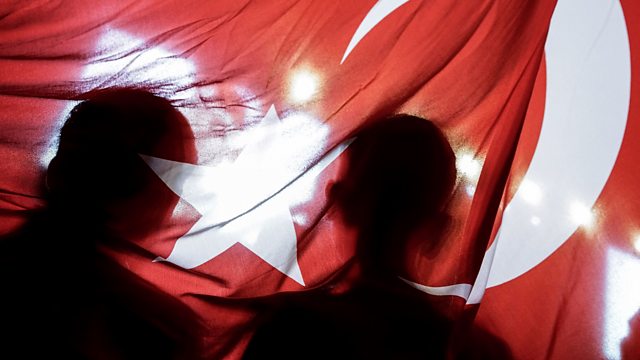 Kate Adie presents dispatches from Turkey after the abortive coup, South Africa on HIV/Aids, growing economic worries in Cuba, a visit to the Niger delta, and Carrara's marble.

Kate Adie introduces analysis, reflection and reporting from correspondents around the world. As Turkey recovers from last week's attempted coup, Mark Urban finds that in Ankara the conspiracy theories are burgeoning. Could these events be the pretext (or a catalyst) for Turkey snubbing the EU, walking away from its relationship with the US or even distancing itself from Nato? Karen Allen's been at the 21st International Aids Conference in Durban to get a global picture of the HIV epidemic; while there have been some notable advances on treatment and prevention, she sees South Africa's still struggling to deal with the virus. Despite the heavily-reported warming up of its relationship with the USA, Cuba still has a hidebound economy and is warning its people to tighten their belts and prepare for austerity - again - says Will Grant in Havana. Martin Patience reaches some resentful corners of Nigeria's Delta region the only way anyone can: by speedboat, and with an entourage of local dignitaries. And Antonia Quirke treads in the footsteps of giants, seeing how the beautiful, creamy marble which once inspired Michelangelo is still being quarried from a site in Tuscany.

A Tale of Two Men in a City