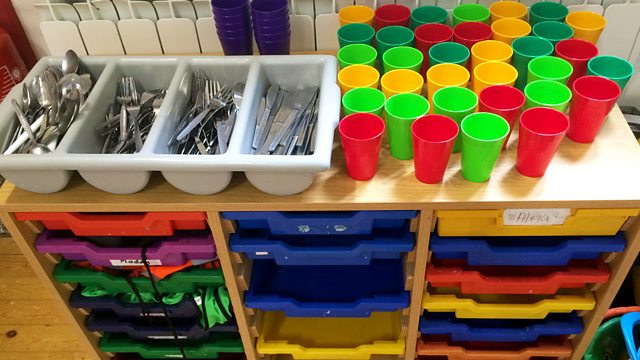 Thousands of children could be affected by a government decision to change funding for infant free school meals. Sheila Dillon speaks to schools and school cooks to hear why.

In 2013, The School Food Plan was published aiming to revolutionise food in schools across England, and to show countries around the world what providing good food in schools could look like. Out of the policy came 'universal infant free school meals', dubbed by the Government as "good news" for any family with small children at infant school. A £600 million commitment to giving children a hot meal at lunchtime.

But in this programme, one of the authors of the School Food Plan says the Government failed to listen to the advice it asked for. Now thousands of primary schools across England face funding cuts which could see them struggling to provide school lunches to tens of thousands of pupils.

Sheila Dillon hears how a Government report on funding food in small schools was never published and asks what the future holds for school food across the UK in an uncertain political climate.

Presented by Sheila Dillon
Produced in Bristol by Clare Salisbury.

Albania and the Cheese Road

The Department for Education has refused to publish a report which said England's smallest schools cannot afford to provide free school meals, according to a former policy adviser. Read the BBC News Online article, published in conjunction with this episode of The Food Programme.