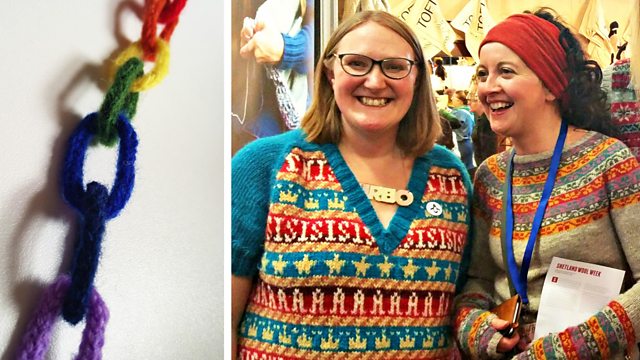 Programme that offers a female perspective on the world. One listener kick-starts a chain of interviews, starting with knitwear designer Kate Davies.

One listener kick-starts a chain of interviews, starting with knitwear designer Kate Davies. Maylin Scott is a knitting enthusiast who's been inspired by Kate's impact on modern knitting as well as her candid writing about her life on her blog.

What's it like when you'd like to have a sex life with your partner, but you find you have a low libido? What could be the reasons and can you do anything about it? One listener shares her experiences, and we discuss what options are available to bring about change.

Woman's Hour's podcast reaches thousands of listeners around the world. Today, how it kept one teacher in touch with the UK when she was working in Russia.

A discussion about a statue to Crimean nurse Mary Seacole prompted a tweet asking us to champion another great female role model, Kofoworola Abeni Pratt, probably the first black nurse in the NHS and the first Nigerian to be chief nurse in her own country. Janet Davies from the Royal College of Nurses talks about her legacy.

Another listener noted we spoke to a lawyer as an example of a 'successful' woman. What about people like his wife, a teacher, or his sister, a nurse? Just as successful to him. Is it time to re-evaluate what's meant by success and give more credit to women who work in traditionally less glamorous or female-dominated roles?

Listener week: The mystery of the lost diary, Lyme disease, Child of a Catholic priest

See all clips from Listener Week (3)