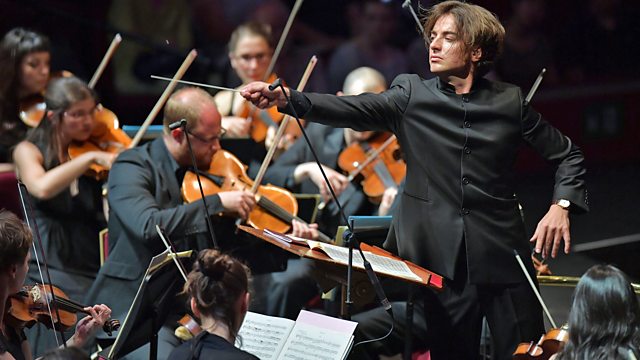 Jérémie Rhorer's energetic period-instrument ensemble makes its Proms debut along with fast-rising soprano Rosa Feola. The orchestra opens with Mozart's vigorous Symphony No. 39, the first of the composer's final trilogy.
Just like Mozart, Mendelssohn had an uncanny way of balancing head and heart in complex musical arguments, as heard in the thrusting brilliance of his Fourth Symphony, the 'Italian', tinged with poetry and romance

PROMS EXTRA
2016 is the centenary of the death of the great American writer Henry James. When he was 26 years old he visited Italy for the first time and fell in love with the country. He wrote an acclaimed collection of essays called Italian Hours. At a concert that features Mendelssohn's Italian Symphony, novelist and Henry James expert Philip Hensher reflects on his writing. He is joined by Professor Philip Horne - editor of Henry James: A Life in Letters and a series editor of the Penguin Classics publications of Henry James's novels. Highlights of a discussion hosted by Rana Mitter and recorded at Imperial College Union earlier this evening.