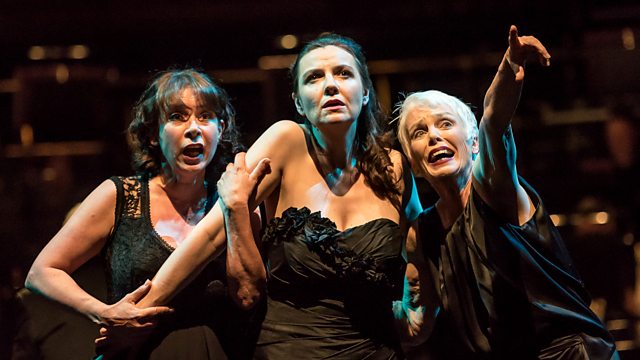 Donald Macleod with the climax to Wagner's Ring cycle Gotterdammerung (The Twilight of the Gods) in Opera North's production from Sage Gateshead.

Donald Macleod with the great climax to Wagner's Ring Cycle, Götterdammerung - The Twilight of the Gods, in Opera North's critically acclaimed production from Sage Gateshead. The hero Siegfried, ventures though the Rhineland to the home of the Gibichungs, there to confront his fate and the destiny of the gods.

Chorus and Orchestra of Opera North conducted by Richard Farnes.

See all recipes from Gotterdammerung

The Norns, daughters of Erda, used to spin the rope of destiny in the shade of the World Ash Tree, near the Spring of Wisdom. Wotan sacrificed an eye to drink at the spring; when he broke off one of the branches of the tree for a spear, the tree died from its wound and the spring dried up. The Norns moved to Brünnhilde’s rock. Gunther, chief of the Gibichungs, and his sister Gutrune are the legitimate children of Grimhild; Hagen, their half-brother, is the illegitimate son she bore to Alberich for a payment. Hagen is thus the product of lovelessness and the pursuit of power: his father conceived him solely to get the ring back.

The Norns continue to spin the rope of destiny, though they no longer know everything that has happened, is happening or will happen; they are not even sure whether the light they see is dawn or the fire surrounding the rock. As night wanes, their vision fades. Alberich’s curse on the ring gnaws at their rope. It breaks. The Norns return below to their mother, Erda. From now on mankind is in charge of its own destiny.

Brünnhilde urges Siegfried to action in the world. He gives Brünnhilde the ring, in gratitude for all she has taught him and as a token of their love. In return she gives him Grane, her horse.

The Hall of the Gibichungs on the Rhine

Gunther is preoccupied with whether his renown is worthy of the Gibich name. Hagen points out that there is a great treasure that the Gibichungs have not won and, further, that neither Gunther nor his sister is married. Hagen advises Gunther to marry Brünnhilde, the noblest woman in the world. He suggests Gutrune use a drug to make the hero Siegfried fall in love with her. Brünnhilde is protected by the fire that surrounds her rock, but Siegfried can win her for Gunther. At that moment Siegfried’s horn is heard.

Gunther bids Siegfried welcome. They exchange vows of friendship. Hagen inquires about the Nibelung treasure. Siegfried shows him the helmet and explains that he left all the rest behind except for a ring, which he gave to Brünnhilde. Hagen tells him the helmet can transform its wearer into any shape and transport him instantly to any place.

Gutrune brings the magic potion. Siegfried drinks to his beloved Brünnhilde. But once he has drunk he falls passionately in love with Gutrune, losing all memory of Brünnhilde. For Gutrune’s sake he offers to help Gunther win the woman he desires. Gunther describes Brünnhilde and the fire that surrounds her rock. Siegfried offers to use the helmet to win her for Gunther. Gunther and Siegfried swear an oath of blood-brotherhood. Hagen does not participate, explaining that his cold blood would spoil it. Gunther and Siegfried set off, leaving Hagen on watch. He gloats over the success of his plans and looks forward to owning the ring.

Brünnhilde is astounded at the arrival of her sister Waltraute. She misunderstands the reason for the visit, assuming that Wotan has forgiven her and that Waltraute has come to share her love and joy. Waltraute explains that, on the contrary, Wotan knows nothing of her mission; he sits silently in Valhalla, with his broken spear in his hand, waiting for the end, which will be signalled by the return of the ravens he sent out. But he did tell Waltraute that if Brünnhilde gave the ring back to the Rhinedaughters she would save both him and the world. By now Brünnhilde is indifferent to Valhalla’s fate. She refuses absolutely to give away the ring, Siegfried’s pledge of his love. Waltraute leaves in despair.

Brünnhilde sees the flames surrounding the rock flare up. She hears Siegfried’s horn and goes to meet him, only to find him in Gunther’s shape. Siegfried disguised as Gunther wrests the ring from her hand. He says that his sword Nothung will separate them that night.

In front of the Hall of the Gibichungs

As Hagen sleepily keeps watch, Alberich reminds his son to nurture the spirit of hatred in his soul, to plot Siegfried’s destruction and to obtain the ring. As day dawns Alberich fades from Hagen’s consciousness.

Siegfried returns with the news that Brünnhilde yielded to him in his disguise as Gunther. Gutrune goes to gather all the women to share in the celebrations, leaving Hagen to call the men. Hagen sounds his horn as though summoning the men to battle. He then announces the wedding of Gunther and Brünnhilde. The men laugh at his grim joke. Hagen reminds them that they must defend Brünnhilde and avenge her if she is wronged.

When Gunther welcomes Gutrune and Siegfried as the second bridal pair, Brünnhilde is appalled that her lover does not recognize her. She notices the ring on his finger and accuses him of stealing it from Gunther. Siegfried remembers that it came from the Nibelung hoard. Enraged, Brünnhilde rounds on Siegfried, claiming that he slept with her. He swears on Hagen’s spear point that he kept his word to Gunther. She swears she spoke the truth and insists that Siegfried must die for his treachery. Siegfried invites the men and women to enjoy the wedding feast.

Brünnhilde broods over the mystery. Hagen offers to avenge her, but she reveals she used magic to make her lover invincible; she left his back unprotected, however, as no hero would turn it to his enemies. Hagen realizes this is where he can strike. Brünnhilde insults Gunther for his cowardice and, together with Hagen, she persuades him that Siegfried must die. Gunther thinks how Gutrune will suffer; Brünnhilde curses her for having stolen Siegfried’s love; Hagen suggests concealing the murder as an accident during a hunt.

Gunther and Brünnhilde appeal to Wotan, the god of oaths, to avenge their wrong. Hagen calls on his father, Alberich, and looks forward to the day when they regain possession of the ring.

The Rhinedaughters still long for the gold that was stolen from them. Siegfried appears and they flirt with him and ask for the ring on his finger. When he does decide to give it to them they warn him that it was cursed by the Nibelung, who stole the Rhinegold from them, forged the ring and then lost it. Siegfried is doomed to die, unless he gives it back to them. Their threats leave him unmoved: he refuses to give them the ring. The Rhinedaughters resolve to ask Brünnhilde for help.

Hagen, Gunther and the men arrive. Siegfried tells them that the Rhinedaughters warned him he would die. As Gunther broods gloomily, Hagen asks Siegfried to relate his youthful adventures. He tells them about Mime, Nothung, his fight with Fafner, the birdsong he understood, how he found the ring and helmet and killed Mime. As Siegfried’s memory falters, Hagen offers him a drink. Now Siegfried remembers how he heard about Brünnhilde, how he passed through the fire, awakened her and embraced her.

Hagen points to the ravens that circle over Siegfried and then fly away towards the Rhine. Hagen stabs him in the back, claiming that he has punished perjury. Before he dies, Siegfried remembers when he woke Brünnhilde from sleep.

The Hall of the Gibichungs

Gutrune’s nightmares stop her sleeping. When Siegfried’s corpse is brought in, she turns in fury on Gunther. He blames Hagen, who justifies his action and claims the ring as his reward. Hagen kills Gunther. Brünnhilde intervenes to silence the squabbling. She has listened to the Rhinedaughters and now understands everything. She orders Siegfried’s funeral pyre to be built and longs to join him in death. She tells Wotan to acknowledge his guilt, his responsibility for Siegfried’s death, adding that Wotan can now rest. She invites the Rhinedaughters to take the ring from her ashes when it has been cleansed by the fire.

Brünnhilde orders the ravens back to Valhalla, taking Loge with them. With her horse, Grane, she goes to meet Siegfried in death. Hagen reaches for the ring but the Rhinedaughters drown him and rescue it. Valhalla and all the gods are destroyed by the fire.

Six ways you learned about Wagner's Ring Cycle without even noticing 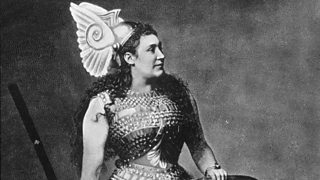 From poetry to film via fantasy box sets, here's how you already know these epic operas.