BBC One
Koko: The Gorilla Who Talks to People
Main content 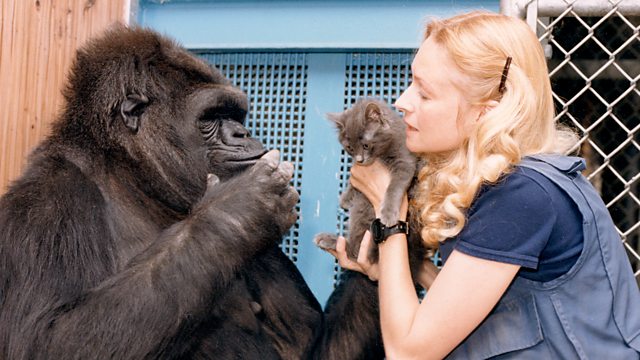 Koko: The Gorilla Who Talks to People

Documentary telling the extraordinary story of Koko, the only 'talking' gorilla in the world, and her lifelong relationship with Penny Patterson, who taught her to communicate.

Documentary telling the extraordinary story of Koko, the only 'talking' gorilla in the world, and her lifelong relationship with Penny Patterson.

Project Koko started as a PhD project to teach sign language to a baby gorilla, but as Koko began to communicate with Penny, an intense bond formed between them. Penny has now been with Koko for over 40 years and claims Koko can reveal fresh insights into the workings of an animal's mind.

Koko's unique life with Penny has been filmed every step of the way. Over 2,000 hours of footage chart the most dramatic moments - Penny's battle to keep Koko from being taken back to the zoo in which she was born, Penny's clash with academic critics who doubted her claims and the image of Koko mourning the death of her kitten. Penny believes that Koko has moved beyond simple language to express complex emotions - such as a longing for a baby gorilla of her own, and that the empathy she evokes in people changes their attitudes to all animals.

This film explores what we can really learn from this extraordinary science experiment turned love affair. Does it tell us more about animal emotions or our own?

See all recipes from Koko: The Gorilla Who Talks to People

See all clips from Koko: The Gorilla Who Talks to People (9)

Want more Koko? Join in the conversation with #TalkingGorilla