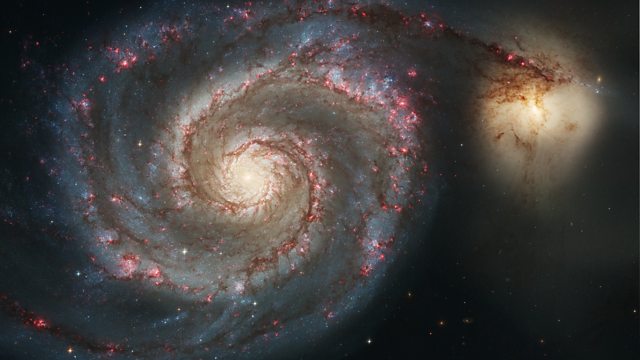 Secrets of the Whirlpool Galaxy

A look at M51 aka the Whirlpool Galaxy. By examining it at many magnifications and wavelengths the programme will build up a detailed portrait.

The Sky at Night focuses all its attention on one object - M51 aka the Whirlpool Galaxy.

Sitting approximately 30 million light years from Earth, this spectacular spiral galaxy was first discovered in 1773 by the French astronomer Charles Messier. It is thought to have been the inspiration behind the swirling patterns of van Gogh's Starry Night, and ever since it has fascinated astronomers and star watchers.

So for this month's Sky at Night we have declared June 1st Whirlpool Galaxy Day. On this one day we will be aiming as many telescopes as possible at the galaxy. Images will be taken by optical and infra-red telescopes on top of volcanoes in Hawaii and La Palma, the radio signature will be captured at the Mullard Radio Astronomy Observatory in Cambridge, and in orbit the Swift space telescope will aim its ultraviolet and X-ray sensors at the galaxy.

By examining the galaxy at as many magnifications and wavelengths as possible the programme will build up a portrait of this galaxy - unlocking the secrets of the formation of the spiral arms and revealing how they have triggered a wave of intense star formation.

Mercury: The Problem Child of the Solar System

See all clips from Secrets of the Whirlpool Galaxy (4)