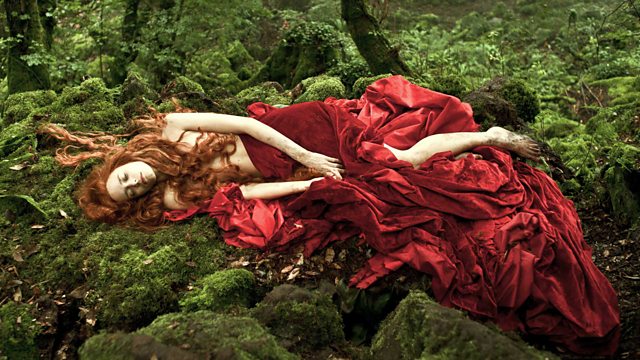 The film Tale of Tales is a fantastical interweaving of fairytales, based on a collection of stories published by the 17th Century poet Gianbattista Basile. It stars Salma Hayek, Toby Jones, Vincent Cassel and John C Riley and is directed by Matteo Garrone, who previously made Gomorrah. Larushka Ivan-Zadeh reviews.

Playwright Mike Bartlett, who won Olivier Awards for his plays King Charles III and Bull, discusses his new play Wild, based on an Edward Snowden-like character who faces the consequences of leaking thousands of classified documents about US operations at home and abroad.

Charlotte Mullins reviews the exhibition of drawings by 19th Century spiritualist Georgiana Houghton at the Courtauld Gallery in London. Layers of watercolours and gouache, painted, she believed, under the influence of a spirit, Houghton's work has long been neglected. Now her abstract works have been reexamined as precursors of the work of artists such as Kandinsky and Mondrian.

Suburra portrays a dark and rain-soaked Rome, where mafia families plot to turn the city's waterfront into the next Las Vegas. The scheme involves shady deals with politicians, the Vatican and warring organised crime gangs. Director Stefano Sollima explains why he is drawn to the underworld of Italy and why he thinks Italian film is enjoying a renaissance.

Main image above: Stacy Martin as Young Dora in Tale of Tales

Wild is at the Hampstead Theatre, London until 16 July 2016.

The Georgiana Houghton: Spirit Drawings exhibition is at the Courtauld Gallery, London till 12 September 2016.

Image: The Portrait of the Lord Jesus Christ, by Georgiana Houghton, 8th December 1862, watercolour on paper.