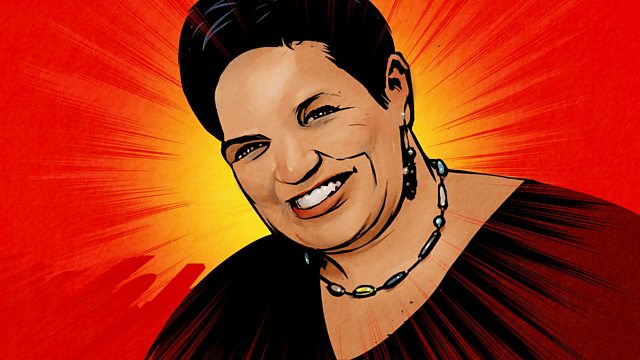 Jackie Kay, the newly appointed makar, guest edits the programme. She looks at writing poems to order, and at poems based on the experiences of refugees in the UK.

The newly appointed Makar - Scottish National Poet - guest edits the programme. The subjects she has chosen are

Writing poems to order - Jackie and fellow poet Imtiaz Dharker on writing commissioned poems. Both have recently written poems inspired by bookshops which are published this week in the Off the Shelf anthology and will form part of the Shore to Shore tour in which they and other poets will be touring the UK giving poetry readings in independent bookshops. Shore to Shore starts on the 19th June in Falmouth and ends on the 2nd July in St Andrews.

Vitiligo and hyperpigmentation - What causes these skin conditions and what it's like to live with them? with dermatologist Dr Sunil Chopra and Natalie Ambersley who has had vitiligo since she was a toddler.

Refugee Tales - Refugee Tales are a series of poems and stories based on the real experiences of refugees in the UK interpreted by writers and poets and published to bring attention to the situation of people held in long term detention. Refugee Tales was set up by the action group Gatwick Detainees Welfare Group who are campaigning for a 28 limit to detention. Reporter Catherine Carr talks to poet Patience Agbabi and 'Farida' who came to this country as a refugee. Anna Pincus, of the GDWG joins Jackie live in the studio to talk about Refugee Tales and their modern interpretation of the Canterbury Tales walk.

Complicated grief - Psychotherapist and agony aunt Philippa Perry on how to deal when the grieving process is complicated by a difficult or unresolved relationship with the deceased.