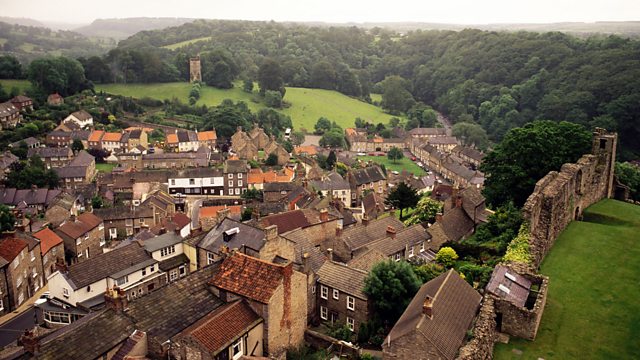 With readings from Horace to Dickens performed by Julian Rhind-Tutt and Lia Williams, and music from Beethoven to Duke Ellington, Words and Music explores Town and Country.

We begin in the city.  The grimy, gritty Salford where Ewan MacColl grew up.  His song Dirty Old Town serves as our entry point.  The first stop on a musical and lyrical odyssey from town to country, on locomotives, across brides and through suburbs, to the idealised rural dreams of childhood.

Horace’s Town and Country Mouse brings back memories of my long forgotten school Latin lessons.  This Victorian translation of the fable suggests that the simplicity of country life is preferable to the dangerous excitement of the bright lights and big city.

The cries of street sellers lead us into a scene of mud, mire and fog.  Dickens’ opening to Bleak House is a visceral depiction of a cold and wet Victorian London.
Next we journey north to Heston, Mrs Gaskell’s fictional thriving industrial cotton town.  The never ending movement of people and traffic from the mill forms a stark contrast to the countryside beyond.

Back to London for a Victorian music hall number sung by Gus Elen.  The view from his suburban garden across the city has been obstructed by the urban sprawl of all the houses in-between.
In The Spell of London HV Morton describes a city, not of industrial activity but quiet of commerce, where the office at night is a deserted scene of ghostly silence.  Our country mouse may well be safely tucked up at home but this London is a place where you're never far from a rat.
We pause now to contemplate the frantic pace of city life with Philip Glass’s composition Mad Rush.  It is a piece without beginning, middle or end and its lack of obvious narrative gives us a moment or two of respite.
We continue on our travels across two iconic river crossings.  Wordsworth considers the view from Westminster Bridge, while The Kinks sing about Waterloo Bridge.  Ray Davies who wrote Waterloo Sunset has said that the protagonists were not, as popularly believed, Terrence Stamp and Julie Christie.  The image he had in mind was of his sister and her boyfriend walking into the future.  I still like to imagine two icons of the swinging sixties crossing the river towards Soho for a night of revelry.  It is a song that takes as long to sing in my head as it takes to walk across the bridge and that pleases me.  The version that I have chosen to use is the original mono recording.

We leave London for the Paris of Emile Zola.  His description of a railway station in the 1890s is a dark and foreboding one, where an unending stream of trains plunges away into the deepening shadows.
Strauss lends a lighter touch with his celebration of the age of steam in the locomotive inspired waltz Reise-Galopp.
John Betjeman’s hymn to metro-land, Harrow on the Hill, guides us out of the city and into the growing 1950s suburban hinterland between town and country.

Across the Atlantic now to the New York subway, where Duke Ellington regularly took the "A" Train.  His musical response to the pace and frenetic excitement of his surroundings was to become his signature tune.
We stay in New York and visit the valley of ashes, a solemn dumping ground on the outskirts of the city.  It is used by F. Scott Fitzgerald as a grey contrast to the glittering opulence of West Egg where Gatsby’s bright young things partied into the night.
The cartoon mouse Jerry is the real star of our next piece.  The 1945 animated short A Mouse in Manhattan was a retelling of Horace’s original Town Mouse and Country Mouse.  I remember it mainly for its musical score, The Manhattan Serenade.  Way out west next to the Californian Salinas Valley.  In the opening to East of Eden, Steinbeck evokes childhood memories of beaconing mountains and a river that was not much to boast about.  Aaron Copeland’s Appalachian Spring here provides a cinematic backdrop to the reading.
Judee Sill is often associated with the so-called Laurel Canyon sound of the early seventies. But her haunting composition There’s a Rugged Road is stuffed full of wild west imagery, where the prairies roll through some celestial landscape on the long and lonely road to kingdom come.  Her songs are seldom played on the radio and she deserves to be more widely heard.

We leave the town way behind and head next into the landscape of childish imagination. Rest a while and enjoy bucolic rural domesticity of a Hobbit and Mendelssohn’s playful incidental music to A Midsummer Night’s Dream, before joining Alice for an adventure in the heightened reality of The Queen of Heart’s garden.
Our journey has now reached the beautiful English countryside in full bloom.  In his poem April Rise, Laurie Lee celebrates the natural world for all its springtime glory.  The pastoral symphony from Handel’s Messiah here seems like a fittingly peaceful interlude.
Another poem by John Betjeman takes us to a corrupted version of Englishness.  His lament to a mock Georgian pub that replaced the genuine and much love village inn suggests a disconnect between memory and reality.
John Blow’s Venus and Adonis is one of the first English operas.  A chorus of shepherds and shepherdesses briefly take us back to an idealised vision rural antiquity.
To a Wessex milking parlour now for Hardy’s portrayal of the country idyll.  We join Tess who is full of sly enquiry upon a cow.
In the extract from Haydn’s Die Jahreszeiten an autumnal scene is described, where the joyful farmer celebrates the seasonal ripening of the crops that fill his heavy-laden wagon.
In a passage from The Go-Between, L.P. Hartley evokes a cricket match from a lost era between villagers and gentry.  Leo is an emotional husk of a man now, looking back on events of a hot summer half a century before that defined the rest of his life.  He is disturbed by the image of a church spire that upsets the symmetry of nature’s plan.
Bing Crosby and The Andrews Sisters sing Cole Porter’s Don’t Fence Me In, which is a gorgeous indulgence at this point.  It is an honest plea for land, lots of land under starry skies above.

We return to an idealised English country scene for Longfellow’s portrait of the village blacksmith who is toiling, rejoicing and sorrowing onward through life.
Finally to Spiegel Im Spiegel, a timeless musical piece by Arvo Pärt written in 1978 that serves as a meditative lament to loss.  A loss of childhood dreams, long-gone country ways and yearning for simpler times.
We end our musical and literary journey from town to country with A.E. Housman’s poignant conclusion that he may never return to those blue remembered hills of his Shropshire childhood.