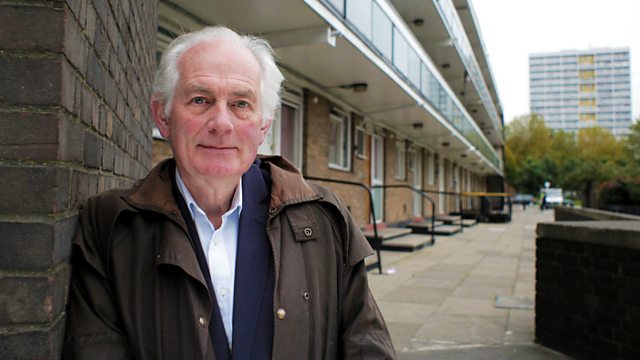 Dan Cruickshank: At Home with the British
Episode 3 of 3

Dan explores the high-rise flat in London's East End. He charts the history of the Lincoln estate, which went from a dream of luxury to deprivation and social exclusion.

If modern Britain lives in a terrace house and loves a cottage, it cannot make its mind up about the high-rise flat. Is the skyscraper a blot on the landscape, or the answer to the national housing crisis?

For Dan Cruickshank, the idea of living high above the city streets really is the future once again. 21st-century London is the site of an extraordinary building boom. Hundreds of residential high-rise towers are being built at record speed, many hugely controversial, as private developers cotton on to what social housing idealists realised 60 years ago.

Dan is in Bow in east London, charting the extraordinary history of one estate - the Lincoln. Designed in 1960 for the London County Council by a young idealistic architect, the 19-storey Lincoln was once the tallest residential building in London. Inside every flat were the latest space-age gadgets - a lift, a shower and a fitted kitchen. But the dream turned sour. The Lincoln became notorious for drugs and violence. There was even a brutal murder. It was the same all over Britain - the flat was a byword for deprivation and social exclusion. But then, just as everything looked lost, the Lincoln was saved and with, perhaps, the hopes of an entire generation for that most precious of things - a home. For Dan, as perhaps for Britain, 'the only way is up'.

See all episodes from Dan Cruickshank: At Home with the British