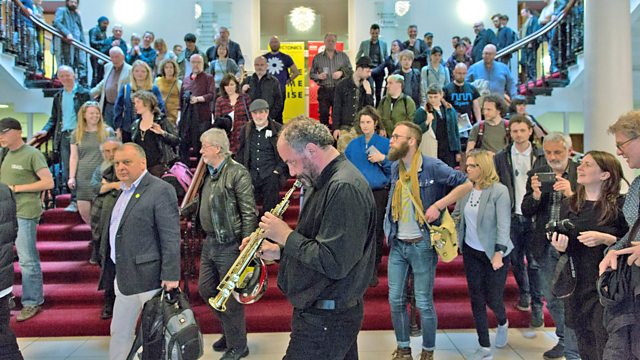 Robert Worby presents new music recorded at the Tectonics Festival in Glasgow earlier this month.
Tonight's music includes the world premiere of a BBC commission from Laurence Crane: Cobbled Section After Cobbled Section, performed by the BBC Scottish Symphony Orchestra conducted by Ilan Volkov.
The orchestra also performs two more world premieres: Fields Have Ears (10), by Michael Pisaro, a piece for orchestra with piano (played by John Tilbury) inspired by standing on the edge of the Grand Canyon at night;
and Musique Sans Frontieres by Alvin Curran, a spectacular site-specific piece spanning 3 different locations and adding bands of bagpipes, brass, saxophones and a choir to the orchestra.
Plus, an improvised solo from violin virtuoso Jon Rose.