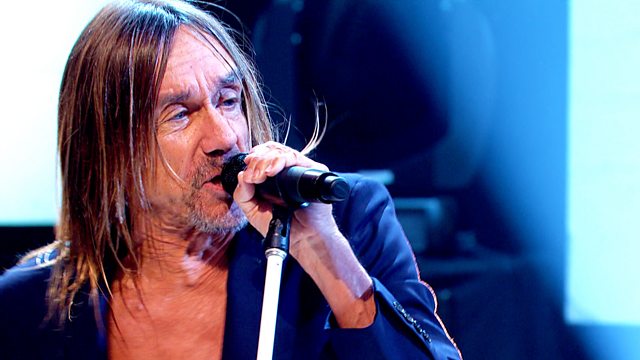 Joining Jools on the fifth show of this run is ultimate frontman and all-round icon Iggy Pop, who finally makes his live debut on the show with tracks from his recent and 17th studio album Post Pop Depression, recorded with Queens of the Stone Age's Josh Homme. Josh joins Iggy on the show along with fellow QOTSA band member Dean Fertita and Arctic Monkeys drummer Matt Helders. French rock 'n' roll chanteuse Lou Doillon, daughter of singer Jane Birkin and director Jacques Doillon, is in the studio with her band to perform a couple of numbers from her second album Lay Low.

Also on the show is Jamaican reggae revival/hip-hop star Protoje, who had great success with his 2015 track Who Knows feat Chronixx, which became one of the biggest reggae crossover tracks out there and launched Protoje as the breakthrough artist in reggae. He and his eight-piece band run through tracks from his current album Ancient Future.

Graham Nash, formerly of CSN&Y and the Hollies, launches his sixth solo album This Path Tonight, his first in 14 years, which is produced by Shane Fontayne - who joins Graham in an acoustic duo for this performance. Two acts making their UK TV debuts are Stockport-born indie pop band Blossoms and from Nashville, Tennessee-based Margo Price, a country music/honky tonk singer-songwriter who has just released her debut album Midwest Farmer's Daughter on Jack White-founded label Third Man Records.