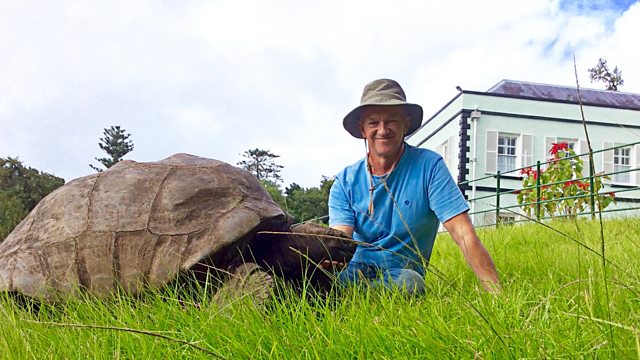 St Helena - Joining the Rest of Us
Episode 1 of 2

St Helena, the second most remote island in the world, is to get an airport for the first time. Joe Hollins, island vet, records the final months of isolation and anticipation.

St Helena, a tiny volcanic scrap of an island in the South Atlantic, dazzling in its flora and fauna, the second most remote community in the world, is about to change forever, and BBC Radio 4 has commissioned a unique ringside perspective on the historic event.

Since the May 1502, when the island was discovered by the Portuguese, the only way to access the island was by sea. No wonder it's mighty isolation struck fear into the heart of Napoleon as he approached its monstrous cliffs.

Now a brand new airport is being built, and will, it is hoped, tempt up to 20,000 tourists a year to visit the island, where 4,000 'Saints' make up the current population.

It will be one of the most beautiful and precipitous airports in the world, and the hope is that the revenue will strengthen St Helena economic viability; but how will it change the way of life of this remote and wild place?

Joe Hollins, veterinary surgeon and unlikely reporter, has, for the past 6 months, been recording his life on the island, from the perspective of a vet, capturing the beating heart of the community, along with quite a lot of sheep - to find out what changes the islanders anticipate as they lose their isolated status.

Being called out to dissect whales, inseminate cows, tramp donkey paths, inspect tropical fish and perform endless operations on pets, Joe's life as a vet has given him an insight into the island life, not least taking care of the world's oldest land creature, Jonathan, a Seychelles tortoise who is probably 182 years old.

Generations of "Saints", with their distinctive accent, have climbed cruel looming cliffs to fish and farm; guano glints like glitter on the rocks, and masked boobies squawk at the visitor rather than fly away. It certainly sounds like the sort of destination adventurous tourist have been looking for.

Programme two takes up the story of the retirement of the last Royal Mail Ship, the RMS St Helena, which has been the lifeline for the island, as it completes its final tour of duty. Its also been the means by which Joe has sent his recordings back to the UK, on one of the longest mail routes in the world.

Music: "On The Isle of St Helena" sung by Steve Turner, on his "The Whirligig of Time" album

See all episodes from St Helena - Joining the Rest of Us