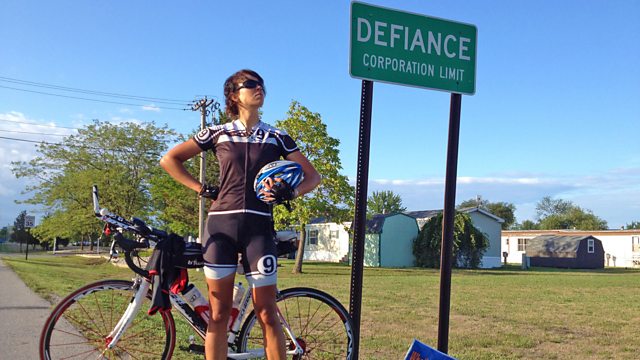 Juliana Buhring decided to cycle the globe after the man she loved was killed. She was a complete novice, had no support crew, but rode across 19 countries in 152 days, helped by strangers and a network of people who, like her, had escaped the Children of God cult.

This week David Cameron announced that OFSTED will be asked to look at mental health provision when inspecting secondary schools. Reporter Ena Miller went to Aultmore Park Primary School in Easterhouse, Glasgow to meet a charity already working with children.

The Celia novels, a series of children's books about a little girl called Celia, are classics of Spanish literature. The author is known by her pen name, Elena Fortun. Professor Nuria Capdevila-Arguelles, expert in Hispanic and Gender studies at the University of Exeter describes Fortun.

Is there still a social taboo when it comes to being an older mother? Jenni speaks to women with different experiences: Cari Rosen, editor of Gransnet, who had her daughter aged 43; Naomi Gryn who gave birth when she was 51 and Jackie Reeves who adopted her only son, aged 61.

In 2014 David Cameron promised to modernise an outdated law that doesn't allow the details of the mother of the bride or groom to feature on marriage certificates in England and Wales. Caroline Lucas MP talks to Jenni about why there was still no mention of an update in yesterday's Queens's Speech.