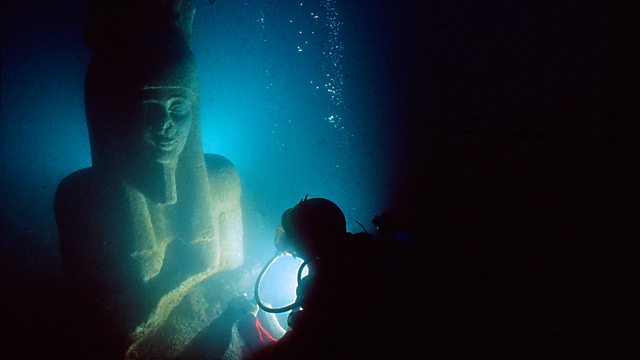 Sunken Cities: Egypt's Lost Worlds is the British Museum's first major show on underwater archaeology, and brings together more than 200 discoveries by the French diver and archaeologist Franck Goddio. It tells the tale of two cities, Thonis-Heracleion and Canopus, and the relationship between Greece and Egypt. Professor Edith Hall reviews.

John Carney' s film Once won the Oscar for Best Original Song in 2007. The writer and director discusses his latest film Sing Street, about a boy growing up in Dublin during the 1980s who escapes his strained family life by starting a band to impress the mysterious girl he likes.

Han Kang, winner of the 2016 Man Booker International prize, talks to John about her novel The Vegetarian. The story centres on an ordinary wife, Yeong-hye and her ordinary husband, whose lives change dramatically when Yeong-hye decides to stop eating meat.

As his Hellens Music Festival prepares to open, the concert pianist Christian Blackshaw explains why less is more when it comes to interpreting the great composers.

The BP exhibition Sunken Cities: Egypt's Lost Worlds is at the British Museum, London from 19 - 27 May 2016.

The Man Booker International  Prize-winning book, The Vegetarian by Hang Kan , translated by Deborah Smith is out now.

The Hellensmusic Festival, Herefordshire is on until 20 May 2016.