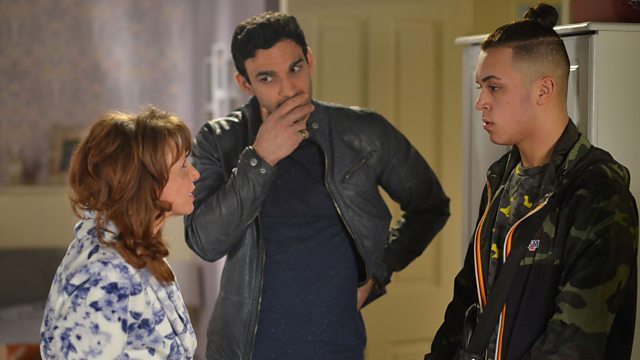 Ronnie tries to support a familiar face despite Jack's advice. Carmel goes to meet with an old flame but will all go to plan? Stacey learns a worrying truth about Martin, who turns to Andy for help. Jane and Ian have upsetting news for one resident.

Tim incessantly knocks on Ronnie’s front door. A panicked Andy alerts Jack that someone’s outside Ronnie’s house – he swiftly heads over. Jack arrives at Number 27 and questions Tim’s presence. Tim states that it’s Hannah’s preliminary hearing today and she went missing last night. Sharon and Jack are cold, but Ronnie’s concerned about where she could be. Tim gets a call from his girlfriend, they’ve found Hannah – she slept in a park. Jack ushers Tim out, who reminds Ronnie that Hannah has a good heart; she’s just broken. A thoughtful Ronnie shares with Jack how much Hannah reminds her of Danielle. Ronnie suggests that she could go to court and speak for her, but Jack doesn’t understand why Ronnie would help her. Later, Jack’s surprised to return home to find Andy babysitting Matthew and Amy; Jack’s concerned when Andy reveals that Ronnie asked to keep her trip into town quiet – he heads to find her.

Back at the house, Jack’s not impressed that Ronnie went behind his back and went to court to help Hannah. Hannah and Tim arrive to share that the CPS are dropping Hannah’s case; Ronnie’s pleased. Hannah refuses to apologise, adamant that it wasn’t her who was responsible for Ronnie’s death threats. The doorbell goes – Sharon answers it and shouts for Ronnie and Jack. The pair are shocked to find a battered and bruised Roxy on the doorstep. Ronnie and Jack wait by Roxy’s hospital bed. Ronnie’s given food for thought when Jack suggests that Roxy may have contacted Glenda. As the pair leave to investigate, Roxy’s eyes snap open; she’s heard everything.

In the Square Gardens, Glenda gazes over at Number 27. Andy lets Glenda in – he clocks that she’s unaware of what’s happened to Roxy. Andy listens in as Glenda makes a call, informing the caller that she’ll get their money. Ronnie and Jack return and fill Glenda in; Roxy’s been beaten up and is in hospital. Glenda admits that Roxy stayed with her for a few months; she did a disappearing act a few weeks ago. Andy chips in, asking who Danny is, and what money she was promising to get back. Glenda claims that Roxy borrowed money from her brother Danny - they haven’t seen or heard from her since. Ronnie brands Glenda selfish for caring about the money, leading Glenda to claim that she thinks Roxy has got herself into trouble. As Glenda and Ronnie arrive at the hospital, they’re floored when they’re told that Roxy has discharged herself...

Carmel catches her son, Shakil, pinching food from Masood’s stall and clips him around the ear. Shakil tells Carmel that Umar wants to see her this afternoon; he’s going to come to Walford and meet her. As Shakil helps Kush on his stall, Carmel rushes over and asks the pair to tell Umar to meet her in the Vic in an hour. Carmel puts on a full face of make-up and nervously gives herself the once-over in the mirror. Kush finds Carmel and questions whether she’s sure she’s doing the right thing – she claims he doesn’t need to worry; it’s only a drink.

Carmel arrives in the Vic – Linda remarks on how wonderful she looks. Kush is unimpressed when he catches Shakil having a fraught conversation with Umar. In the Vic, Carmel sips on her wine as she continues to wait. An upset Carmel flounces out of the Vic and sobs to Kush and Shakil that Umar has stood her up. Kush and Shakil find Carmel back home; Shakil admits that he’d set today up, to try and get she and Umar both in the same room. Carmel sobs at Shakil to get out, but Shakil claims he can’t go – Umar doesn’t want him and neither does his new partner. Carmel agrees that she can’t send him back knowing that. The next day, Carmel tells Shakil that she’s spoken to Walford High about him joining; he’s disappointed he can’t just help out on the market. After clocking Bex and Louise in the café, Shakil feels more positive about starting a new school.

Stacey informs Martin that Belinda’s a rep for ‘ladies in lace’ – an underwear company – she’s going to give Stacey a cut of the profit for hosting a party. Stacey asks Martin to put cash in the bank for when the rent comes out; Martin’s non-committal. As Belinda and Stacey hand out leaflets for tonight’s party, Andy approaches. Stacey asks Andy whether Martin has spoken to him about getting more work; she’s taken aback when Andy informs her that Martin got fired up north. At Stacey’s, the ladies of Walford gather for the ‘ladies in lace’ party. When Martin pops back for his wallet, Belinda blurts out that she and Stacey know that he got fired. Martin’s adamant that he has something else in the pipeline and when pushed to share, states that he’s going to be a model; the whole room sniggers. Honey asks to see the website of the agency that Martin’s joined to check it’s legitimate. Alone with Stacey, Martin explains that he wasn’t skilled enough to keep his building job. Stacey forgives Martin for lying. As the pair head back into the living room, a concerned Honey shows Martin the biography for the agency he’s been signed up with – it’s for strippers and drag queens; Martin’s mortified.

The next day, Martin approaches Andy and asks if there’s any chance he could put some shifts in at Number 5; he’s desperate. Andy feels awful but claims Martin isn’t qualified enough. When a dejected Martin goes to leave, Andy claims that he may be able to help him out a little, but it’s not fully legal. Martin declines. Martin begs Ian for help, Ian relents and hands him back his stall. A thrilled Martin asks Ian to be his best man. Martin walks in on Stacey cutting Pearl’s hair – she claims it’s her new business venture. Martin assures Stacey that she can have whatever she wants for the wedding – he’s thrilled to have his old job back. Later, in the Vic, Andy fills Martin in – they were sent forty extra toilets by mistake; they could flog them and share the money. Martin shakes on it – he’s in.

Alone at home, Sonia feels at her breast, before grinning in disbelief. Sonia finds Tina in the café and informs her that the lump she’d found had disappeared. Tina’s adamant that Sonia should still go to her appointment, but Sonia snaps that it’s pointless and leaves. Sonia firmly tells Tina that she’s going to go to the ‘ladies in lace’ party because she can – Shirley clocks this heated exchange. Shirley finds Sonia en-route to the party and reminds her that Carol didn’t bury her head in the sand– that’s why she’s out in the world living her life. Sonia’s given food for thought. At the ‘ladies in lace’ party, Sonia apologises to Tina for earlier and suggests they head to the appointment together. The next day, Ian and Jane call Tina in for a meeting – they want to thank her for sticking by them when many haven’t. Tina’s shocked when the pair tell her that they have to let her go; they’re going to take over the café instead.

Billy catches up with Jay and informs him that he has a social worker coming to visit tomorrow. Jay’s gutted, but Billy claims it’s just a formality. Jay tells Billy that he’s off to sign on the dole - his job interview got cancelled. Feeling for Jay, Billy suggests that he come and help him out at Cokers’. Les overhears Billy instructing Jay on how he can help out in the funeral parlour – Les summons him for a word. Alone with Billy, Les claims that they can’t afford another member of staff, but Billy clocks on that it’s because Les thinks Jay is guilty. Jay’s crushed as he hears Les ask Billy to get rid of him.

Honey tells Jay that he can’t be around when the social worker comes to interview them – he’ll have to make himself scarce. Honey assures Will and Janet that Jay is here to stay. Pam’s confused as to why Les is so adamant that he doesn’t want Jay working at the funeral parlour – she suggests he should be giving him a chance. Pam claims that she’s going to help Honey by being around when the social worker visits. The social worker arrives at Billy’s – he asks to assess Jay’s contact with Will and Janet. Billy and Honey reiterate that Jay made a mistake; he’s innocent. Billy struggles to cope when the social worker speaks about Jay like an offender.  The social worker informs Billy and Honey that for now, all of Jay’s contact with the children will be supervised; the pair are shocked but agree. Jay arrives at the Cokers’ – Pam is firm that they want Jay to help out there; Les relents.

Buster listens with interest when Belinda mentions that she has a koi pond – he remarks to Lee that she must be loaded. The next day, Buster and Shirley return from the council disappointed – they rejected the anti - Costmart petition. Tina states that she has an idea to stop Ian from selling the restaurant...

Shirley finds Babe, who’s returned from Morocco and asks her to sign the petition against Costmart; she obliges. Left alone, Babe returns to her laptop with a glint in her eye. Back online, Babe types an email that reads ‘Pay up pervert’ – and sends it to Coker and Sons.