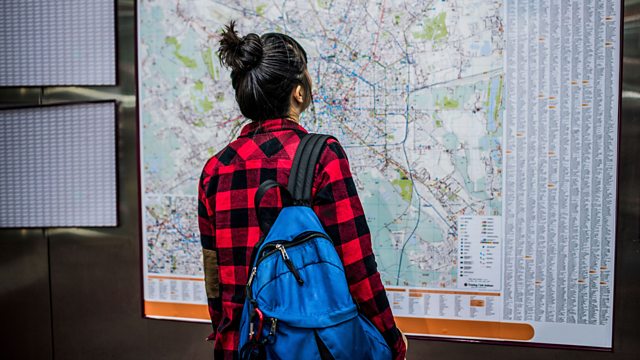 Aleks Krotoski compares our intuitive wayfinding skills to those of the digital world and finds out why describing the best way from A to B still poses problems for tech.

Aleks Krotoski compares our intuitive way-finding skills to those of the digital world and finds out why describing the best way from A to B still poses problems for tech.

Simon Wheatcroft is an adventurer who's run all over the world and at distances that would make marathon runners shudder, he's also blind, he explains how he combined the sensations he gets underfoot with notifications from his fitness app to learn to run solo.

Combining cues from the world around you to find your way is Tristan Gooley's passion. As the Natural Navigator he uses anything natural or man made not only to find out where he is but where he's going. He eschews all navigational tools; maps compasses as well as digital devices in the belief that the head down follow the dot mentality they foster impoverishes our experience of the journey itself.

Thora Tenbrink from Bangor University explains why the directions we receive from our devices often feel so alien that we really have to focus to make sense of them. While tech can use street names and exact distances, humans are vague navigators heading in the general direction and using landmarks. The two approaches aren't always that compatible.

Our natural way-finding abilities can let us down though when we're under stress. Professor David Canter has been studying behaviour in emergency evacuations for much of his career, he explains the sometimes odd and contradictory things we resort to when trying to escape a disaster. So should we look to technology to come to the rescue? We hear from researchers at Georgia tech who explored how far participants would trust a robot to save them from a burning building - apparently quite a lot!

Simon Wheatcroft lost his sight at 17 and began a journey of adapting technology to achieve the impossible. Through the aid of a smartphone and the feeling underfoot Simon learnt to run solo outdoors and ran his first ever race 7 months later – a 100 mile road race.

He explain his training technique to us and how he hopes to build on it for the adventure of a lifetime; running 160 miles across the Namibian desert – solo.

Tristan Gooley is an author and natural navigator.

He set up his natural navigation school in 2008 and is the author of three award-winning bestsellers and the world’s only books covering natural navigation. He explains the basis of his technique, that everything no matter how small or incidental can be a clue to finding your way -  whether in the natural world or on the city street.

Thora Tenbrink is Director of Research, College of Arts and Humanities, and Reader in Cognitive Linguistics at Bangor University. She’s interested in “how we think and how we talk about how we think.” This has led her to explore all sorts of aspects of how we way-find  and in particular the linguistics of directions.

David Canter is one of the UK’s leading experts on human behaviour in an emergency. Having studied numerous catastrophes he’s interested in what turns and incident into a disaster. His research has led him to understand the familiar patterns of people’s behaviour and odd and seemingly contradictory things they’ll do when trying to escape.

His most recent experiment investigated how far people would trust a robot to guide them in an emergency and his results have suggested probably an awful lot more than we should.