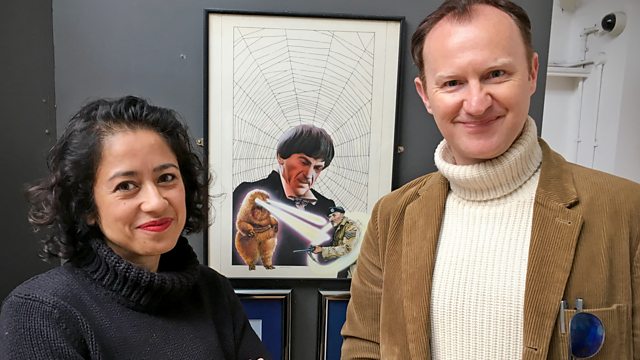 Mark Gatiss and Samira Ahmed assess the Doctor Who novelisations and artwork, and playwright Bryony Lavery explains how she has adapted Brideshead Revisited for the stage.

Mark Gatiss, the writer, actor and Doctor Who fan, gives his response to the re-issue of seven Doctor Who novelisations from the original range by Target Books, and visits the Cartoon Museum's display of original artwork for the books' covers.

Evelyn Waugh's classic novel Brideshead Revisited has previously been made for television and the cinema, and has now been adapted for the stage. Playwright Bryony Lavery discusses her new version for the York Theatre Royal.

Composer Mark Simpson talks about his new opera set in a gay nightclub. Pleasure stars Lesley Garrett as a toilet attendant, and is premiered tonight by Opera North in Leeds.

In Demolition, actor Jake Gyllenhaal plays an investment banker who responds to his wife's death by writing bizarre letters of complaint to a vending company. These lead to an unlikely friendship with a customer service employee, played by Naomi Watts. Larushka Ivan-Zadeh reviews.

Ricky Gervais, The Secret, Mark Elder, The return of the repertory company

See all clips from Mark Gatiss on Doctor Who, Brideshead Revisited, Pleasure, Demolition (2)

BBC Books has reissued seven classic Doctor Who novelisations from the original range by Target Books, and the original artwork for the covers is on display at the Cartoon Museum.   Image:  Doctor Who and the Web of Fear.  Credit: Chris Achilleos