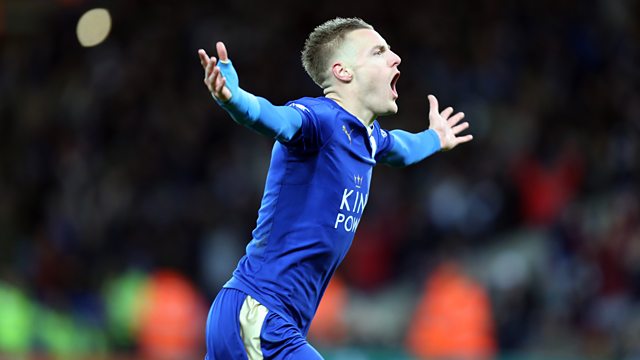 Mark Coles looks at the life and career of the footballer who is within touching distance of leading Leicester City to the Premier League title.

Mark Coles looks at the life and career of footballer Jamie Vardy. In just four years Vardy has gone from being a relative unknown, being paid a few hundred pounds a week at a non-league club, to one of the biggest names in European football. As well as playing for England, Vardy is Leicester City's star player - the team are now hotly tipped to win the Premier League.

Rejected by Sheffield Wednesday while a member of their youth team for being too short, Vardy spent years working in a factory in Sheffield, his recent success nothing short of a Hollywood fairy-tale. Indeed, a Hollywood film is in the pipeline. But his rise hasn't been problem free - in 2007 he was convicted of assault after an altercation outside a pub, and last year he was fined £40,000, by his own club, for reportedly making a racist comment in a casino.

Mark Coles speaks to Vardy's childhood friend Liam Muirhead, his former teacher Dr Chris Wall and one of his first football coaches Gary Marrow, about what has made him the player he is today.