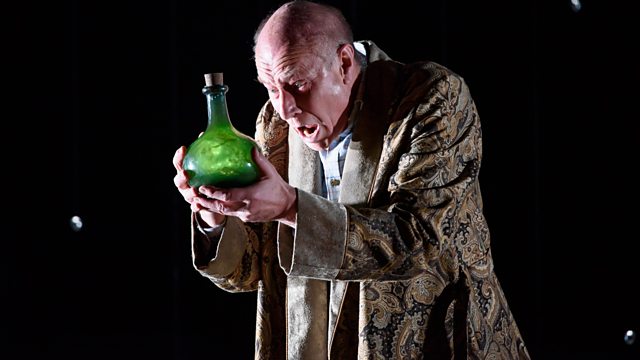 Tom McKinney introduces a performance of Stuart MacRae's new opera The Devil Inside, based on a story by Robert Louis Stevenson and produced by Music Theatre Wales.

Tom McKinney introduces a performance of Stuart MacRae's acclaimed new opera "The Devil Inside", based on a story by Robert Louis Stevenson and presented by Music Theatre Wales.

The opera tells of two young men, lost in the mountains, who stumble across a magnificent mansion, wherein lives an old man as rich as Croesus. The source of the old man's wealth is a magical bottle containing an imp which will grant any wish. The old man offers to sell the bottle, but warns that whoever has the bottle on the day of their death will forfeit their soul to the imp. They must sell the bottle, and for a price less than they paid for.

The production was directed by Matthew Richardson and designed by Samal Blak and Ace McCarron.".