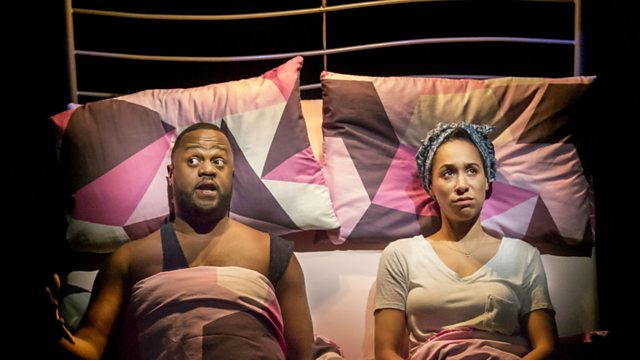 Eye in the Sky, Hotels of North America, The Suicide, Flowers, Conceptual Art in Britain 1964-1979

Helen Mirren, Alan Rickman and Aaron Paul star in Eye in the Sky, a contemporary thriller set in the world of counter intelligence and drone warfare - is the life of a 9 year old girl acceptable collateral damage?

Rick Moody's new novel Hotels of North America has an unusual narrative voice. It takes the form of a series of hotel reviews, as written by Reginald Edward Morse, one of the top reviewers on RateYourLodging.com, where his many reviews reveal more than just details of hotels -they tell his life story.

A new comedy drama on Channel 4, Flowers, stars Olivia Colman and Julian Barratt (The Mighty Boosh) and features an eccentric family struggling to hold themselves together in a crumbling old house.

Conceptual Art in Britain 1964-1979 at Tate Britain shows how artists working in Britain transformed the nature of art, bringing together 70 works by 21 artists.

Dheepan, X at the Royal Court, All That Man Is, Shakespeare at Compton Verney, The Five

Arabian Nights, The Flick, Garth Greenwell, Sicily at the British Museum, All the World's a Screen

Eye in the Sky

Eye in the Sky is in cinemas now, certificate 15.

The Suicide is at the National Theatre in London until 25 June 2016.

Flowers begins on Channel 4 on Monday 25 April at 10pm.