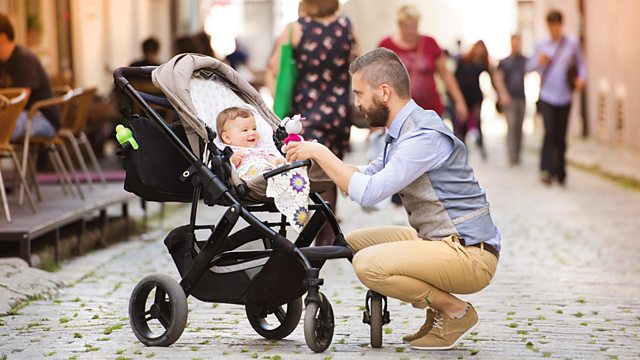 Have only 1 per cent of men taken the option of shared parental leave?

Paternity Leave
This week it was claimed that only 1 percent of men are taking up the option of shared parental leave - a new provision that came into force a year ago. A number of media outlets covered the story, interviewing experts about why there was such a low take-up. But in reality the figures used are deeply flawed and cannot be used to prove such a statement.

Exponential Love
"I love you twice as much today as yesterday, but half as much as tomorrow." - This is the inscription on a card that teacher Kyle Evans once saw in a card from his father to his mother. But if that was true, what would it have meant over the course of their relationship? Kyle takes us through a musical exploration of what exponential love would look like. The item is based on a performance he gave for a regional heat of Cheltenham Festivals Famelab - a competition trying to explain science in an engaging way.

The cost of the EU
One of our listeners spotted a comparison made this week between the UK's contribution to the EU and a sandwich. One blogger says it's like buying a £3 sandwich with a £5 note, and getting over a £1,000 in change. We look at the figures on how much the UK pays to the EU, and what it gets back.

The story of 'average'
In the 1600s astronomers were coming up with measurements to help sailors read their maps with a compass. But with all the observations of the skies they were making, how did they choose the best number? We tell the story of how astronomers started to find the average from a group of numbers. By the 1800s, one Belgian astronomer began to apply it to all sorts of social and national statistics - and the 'Average Man' was born.

And we set a little maths problem to solve...