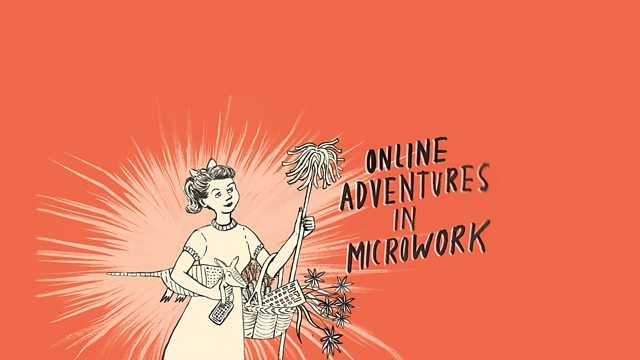 Aleks Krotoski gets down to work. From micro-taskers paid pennies to be the janitor of our digital services to car drivers jumping on the Uber bandwagon.

In the 1st of a new series Aleks Krotoski gets down to work. From micro-taskers paid pennies to be the janitors of our digital services to car drivers jumping on the Uber bandwagon.

Aleks speaks to technology writer Kashmir Hill who spent a month as an invisible girlfriend writing loving texts to service subscribers for a few cents per message. This is just one example of 'micro-tasking' made famous by Amazon's Mechanical Turk service. For Vili Lehdonvirta of the Oxford internet institute they're examples of the hidden human effort going into services we would assume were automated. Its a new form of piece work undertaken by a causal workforce doing it where and when it suits them.

This type of work treats you like part of a system managed by algorithms an artificial, artificial intelligence. In some senses this isn't anything new as work historian Richard Donkin explains using the examples of the time and motion studies pioneered by Fredrick Winslow Taylor and later taken up by Henry Ford.

What is new is that having an algorithm as a boss runs the risk of having only the appearance of freedom and flexibility. Its what attracts people to the so called gig economy, where tasks are farmed out by the app to a willing freelance workforce. Aleks hears both sides of that experience from two people who make their living off a digital platform; one by day and the other by night.

So what promise do these new forms of digital work offer? Aleks discovers they have the potential to be both a race to the bottom for labour markets and usher in a new era for those currently unable to work.

Kashmir Hill is the editor of the Real Future at Fusion. Based in San Francisco, California, she writes about technology and privacy. She talked to us about the month she spent micro-working as an invisible girlfriend.

Dr Vili Lehdonvirta is a Research Fellow and DPhil Programme Director at the Oxford Internet Institute, University of Oxford. His research deals with the design and socioeconomic implications of digital marketplaces and platforms. He’s our guide to the world of platform working from micro-tasks to the on demand economy of Uber and Task Rabbit.

Richard Donkin is an author and journalist who writes for various publications, including the Financial Times. He’s the author of two books, The History of Work and The Future of Work. He sees parallels between innovators of the industrial age: Fredrick Winslow and Henry Ford and the organisational aspects of platform work.

Harry Campbell started his blog in 2014. At the time he was a full time aerospace engineer and part-time Uber, Lyft and Sidecar driver. He explains the ups and downs of being a rideshare driver in LA.

Wingham Rowan is Director of the “Beyond Jobs” project in London, UK. It grew out of multiple UK government investments to create advanced markets for low skilled people seeking non-standard employment. He’s also formerly the producer and host what became the UK’s longest running TV series about the Internet Cyber Café.

Holly Blake is a nomadic illustrator, working all over the world to create colourful images from paper and glue. She runs two online businesses and while she builds them up she supplements her income as a tasker for Task Rabbit.