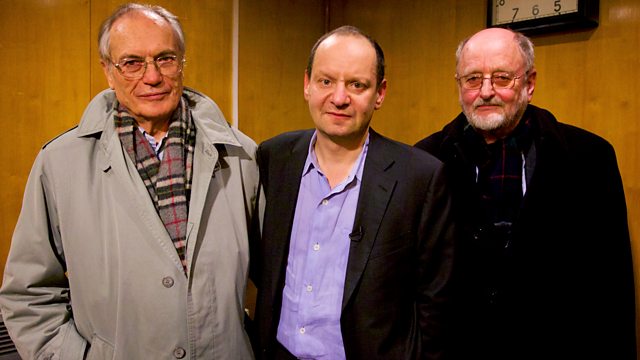 A Storyville documentary: Human rights lawyer Philippe Sands travels across Europe with the sons of two former senior Nazi officers in this study of history and guilt.

Three men travel together across Europe. For two of them the journey involves a confrontation with the acts of their fathers, who were both senior Nazi officers. For the third, the eminent human rights lawyer and author Philippe Sands, it means visiting the place where much of his own Jewish family was destroyed by the fathers of the two men he has come to know. An emotional, psychological exploration of three men wrestling with their past, the present of Europe and conflicting versions of the truth.

What is more important, story or character?
In this film: character, definitely. I have spent over twenty years making drama between this documentary and my last one - often working with scripts in which the drive of the story took precedence over everything else. Perhaps for this reason I seized the opportunities this film offered me to find the shape of the film in the cutting room, free of the limitations of script or story. I don’t even now think of the film as having a story as such - except perhaps the evolving story of the viewers’ relationship with the protagonists, conducted via the shifting perspectives offered by the collage of the film’s sequences.

What made you first want to explore the subject?
Philippe did! He and I are old friends. The subject matter was initially an offshoot of the research he was doing for his book ‘East West Street’. He told me some stories about Niklas Frank - some of them now incorporated in the film - and we started talking about making something together.

How long did it take to get the film off the ground?
Really not long… there was a deep well of good will between Philippe, Niklas and Horst; they were all interested in making the film from the start. We shot for a couple of days with Niklas near his childhood home in Bavaria; the rushes from that trip were more than enough to convince Amanda Posey and Finola Dwyer at Wildgaze that there was something intriguing going on. We were fortunate that Nick Fraser, Storyville Series Editor, became interested soon after that, and we were up and running.

What were you most surprised to learn in the course of production?
That I’m grateful that we live in a society with an effective system for administering justice! I like Roger Ebert’s description of cinema as ‘a machine for creating empathy’ but didn’t realise just how true it was until I made this film. I found through my own relationship to Niklas and Horst, both in reality and on screen, just how much moral judgment can be deflected or suspended by the impact of an empathetic personality - at least outside the legal process.

What have been the differences in reception to the film in countries it has now travelled to?
The film caused a stir among the festival audience it played to in Austria, more so than in Germany or Poland.

Which documentary has most inspired you?
Koyaanisqatsi

Person you’d most like to interview (living or dead?)
Hans Frank; Krzysztof Kieślowski

Best piece of filmmaking advice you’ve ever been given?
‘The best films are always loved into being’

Best piece of filmmaking equipment you can’t live without?
Eyes and ears

If money was no object, what is your dream documentary subject?
I would like to attempt a massive state-of-the-nation docudrama integrating documentary with improvised performance.

Favourite film of all time?
All About My Mother

Most difficult access?
In 1991 I made a film for the BBC about the separatist feminist Andrea Dworkin. It took a long time to develop our working relationship, much of the early communication necessarily taking place by means of - very lengthy - air mail letters.  Andrea’s first letter to me had a sticker over the seal which read “The quickest way to a man’s heart is through his chest.” Things went uphill from there. I wish she were still around.