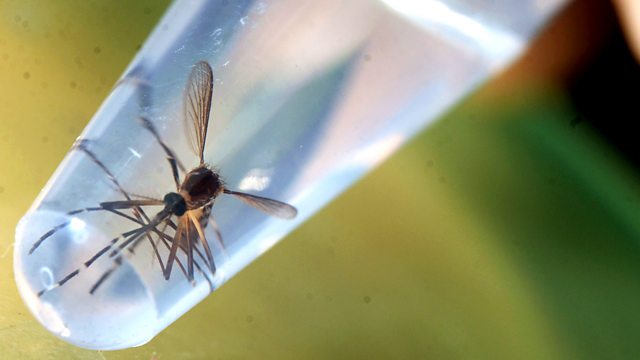 Professor Adam Hart asks if we could, and should, eradicate the mosquitoes that carry deadly diseases such as malaria, Zika, dengue fever, chikungunya and yellow fever.

Over a million people die from mosquito-borne diseases every year. Hundreds of millions more people suffer from the illnesses transmitted by mosquitoes.

Malaria, the most widespread mosquito-borne disease, affects 350-500 million people each year. The Zika virus, which has been linked to birth defects in children is spreading. Dengue Fever infects nearly 400 million people each year, causing an estimated 25,000 deaths and an enormous economic cost in affected countries. Chikungunya, Yellow Fever and Eastern Equine Encephalitis are also transmitted by mosquitoes and are on the rise. These are painful and debilitating diseases which can, in some cases, prove fatal.

So would they be missed if they were wiped off the face of the planet?

Biologist Professor Adam Hart knows only too well how complex and interconnected nature is. If we wipe out an entire species, how will the rest of the natural environment cope? Well, it seems the public enemy number one mosquito - Aedes aegyptii, wouldn't be missed very much at all. It's a mosquito that has evolved fairly recently. The females nearly always feed on humans and they breed in and near our homes, often in small pots of water and car tyres.

In Goodbye Mosquito, Adam Hart discovers some of the latest technological advances being trialled to rid us of these winged-beasts; including genetically engineering male A. aegypti mosquitoes so that their offspring don't survive.