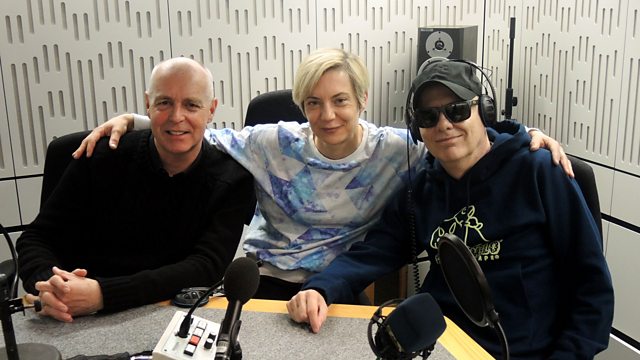 Neil Tennant and Chris Lowe talk to Miranda Sawyer about their latest album and how they and the music industry have changed since they first emerged in the 1980s.

Following on from The Pet Shop Boys standing in on Iggy Pop's 6 Music show, another chance to hear a series first broadcast on Radio 2 in March, marking their 30th anniversary.

With sales exceeding 50-million records and a catalogue of music that spans twelve top 10 studio albums, 40 top 20 singles, and four UK number one records, pet shop boys are the most successful British music duo of all-time.
From Ambridge to Africa, this is the story of their latest reinvention as a successful global live electronic act. The programme examines how the duo has proved a 'certain strain of tuneful hedonism has no compulsory retirement age' and illustrates how they have often walked a tightrope between pop and art, silliness and profundity.
This final part also covers their move from Parlophone Records which resulted in the creation of a new bespoke label, and it discusses their latest album.
The programme also features a PSB collaboration with Jean Michel Jarre: Brick England.
With guests: music producers Stuart Price and Jean Michel Jarre, musician Johnny Marr, writer Jonathan Harvey, set designer Es Devlin, music programmer Pete Gleadall and PSB biographer Chris Heath.
Written and produced by Malcolm Prince.