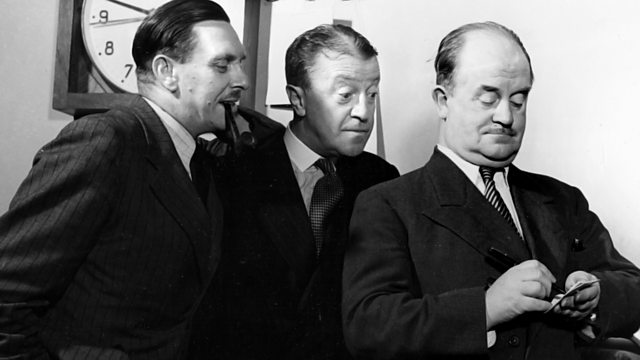 ITMA - It's That Man Again

ITMA proved to be one of the BBC's most popular radio comedies ever produced. It was first transmitted just before the start of the Second World War in 1939 and ran to 1949. Domestic audiences topped 20 million, and the audience worldwide was said to number 30 million. It starred Liverpudlian comic Tommy Handley, who with Ted Kavanagh created the series named after the phrase newspapers often used to describe Hitler: It's That Man Again!

The original setting on a ship was deemed inappropriate once war broke out, and was replaced with the Office Of Twerps, with Tommy as Minister of Aggravation and Mysteries. Other settings followed - a seaside resort, and a war factory which by 1943, for this run of episodes, had been turned into a hotel.

Featuring a host of supporting characters including Dorothy Summers as Mrs Mopp and Jack Train as Colonel Humphrey Chinstrap.

First broadcast on the BBC Home Service in 1943.

See all episodes from ITMA - It's That Man Again