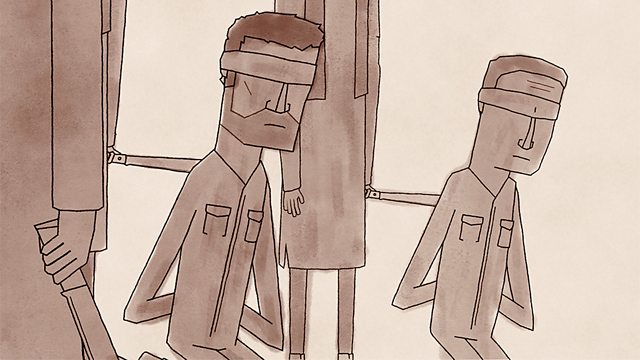 Anyone caught speaking to the western media in so-called Islamic State faces beheading. Mike Thomson reveals how one man has risked his life by penning unique diaries for the BBC.

Ever since so-called Islamic State took full control of the city of Raqqa in north eastern Syria little has been known about day-to-day life there. Having declared it the capital of their self-proclaimed Capital, IS are determined to keep things that way. The penalty for speaking to the western media is beheading and at least 10 activists or journalists have lost their lives in this awful way. Few people now dare to talk.
In addition IS forbids people in Raqqa from leaving the city without permission, so the only way out for many to get out is to put themselves in the hands of local people smuggling groups. To complete the isolation of people there, IS has introduced much tougher controls over local internet cafes, tightened monitoring of mobile phone networks and even banned the sale of televisions.
But over the last year Today Programme Correspondent Mike Thomson has managed to make intermittent contact with a small anti-IS activist group in Raqqa called Al-Sharqiya 24, whose members are determined to speak out. He initially carried short interviews from London with a couple of their members. These were broadcast on Radio 4's Today programme and this gave us all a glimpse of what is happening there on the ground.
But the outside world was still left without much idea of what day-to-day life was like in Raqqa. So one of the group's members agreed to write a series of personal diaries for the BBC about life for him and his family and friends there. What followed is an extraordinary and at time chilling insight into how so called Islamic State's brutality and injustices permeate just about every level of life in their now infamous capital.
In order to protect the identity of the diarist. As well as his friends, family and fellow activists, all names and some other details have been changed.
Mohammed, which is not his real name, takes us from life in what had been a relatively peaceful city, in the first two years of the war, to the takeover by so-called Islamic State. He reveals that within days women were being stopped in the street by IS fighters for failing to completely cover their bodies, while men, rather bizarrely, were ordered to always keep their trousers above ankle length. Both genders would be flogged, fined or made to attend compulsory Sharia classes for breaking such rules.
IS brutality, our diarist tells us, soon gets very much worse. He passes a woman accused of adultery being stoned in the street and men alleged to have talked to foreign journalists or to have links with IS's enemies, being beheaded. He himself is subjected to forty lashes after cursing out loud on witnessing one of these public executions.
Mohammed recounts how one day a friend came into the shop he works in and advised him to take a different route home that night, saying there was something he did not want him to see. Unable to resist his curiosity, Mohammed says he ignored this warning and took his normal way home, only to discover the beheaded body of an activist friend on public display.
We learn how ever increasing taxes imposed by IS are pushing food prices beyond the reach of many ordinary people in Raqqa and that many shops have been forced to close because so much of the population are too afraid to walk the streets. Mohammed tells us that IS has even banned shops from selling televisions in order to limit what they know about life outside the city. Smoking has also been forbidden.
We also hear of the air strikes that have killed so many in Raqqa. From bombing by President Assad's forces prior to IS's takeover of the city which killed his father, to the ongoing ones by Russia that continue to cause panic, alarm and loss of life.
Getting the diaries out of Raqqa was often a heart-stopping experience. For days on end calls to try and contact our diarist and his group would go unanswered. The BBC team often wondered if he and many others had been caught by IS. It was a horrible feeling. On one occasion there was news that two anti-IS activists who had managed to get over the border into Turkey had been beheaded. Mike and his colleagues feared at first that one of them might be our diarist. Fortunately, we did manage to contact him the following day.
What makes somebody speak out in the way Mohammed has, knowing that he is putting at risk the lives of almost ever he holds dear by doing so?
From his diaries the answer to that question soon becomes very clear. Having seen friends and relatives butchered, the life of his community shattered and the local economy ruined by these notorious extremists, our courageous diarist believes he's fighting back by telling the BBC what is happening to his beloved city.